The Best Approach To Story Structure: From Aristotle to Dramatica

Of the various story structure models or theories that exist, we have chosen to focus mainly on Dramatica, which was developed by Melanie Anne Phillips and Chris Huntley.

We chose to work with this model because it is the only one that...

1. Addresses all aspects of story structure simultaneously and in an integrated way, including not just plot and character but also theme (something most models barely touch on).

2. Provides writers with specific help at each stage of a story (from beginning to end) and at each level (from a broad overview of the story down to individual scenes and character interactions). Yet, at the same time...

3. Supports a writer's creativity and originality by allowing for a virtually infinite number of story structures (over 32,000 in its present version).

4. Simplifies the writing process – letting you avoid many problems with story structure before you start writing, or (if you aren't into planning) identify and fix problems in the revision stage.

What's more, Dramatica embodies certain insights into story structure that no other theory does.

The aim of this website is to present practical tips and exercises to help writers, while avoiding a lot of theory. However, if you have an interest in such things, below is a more detailed explanation of why we find Dramatica to be superior to more conventional models of story structure...

Finding A Roadmap For Creating Your Novel 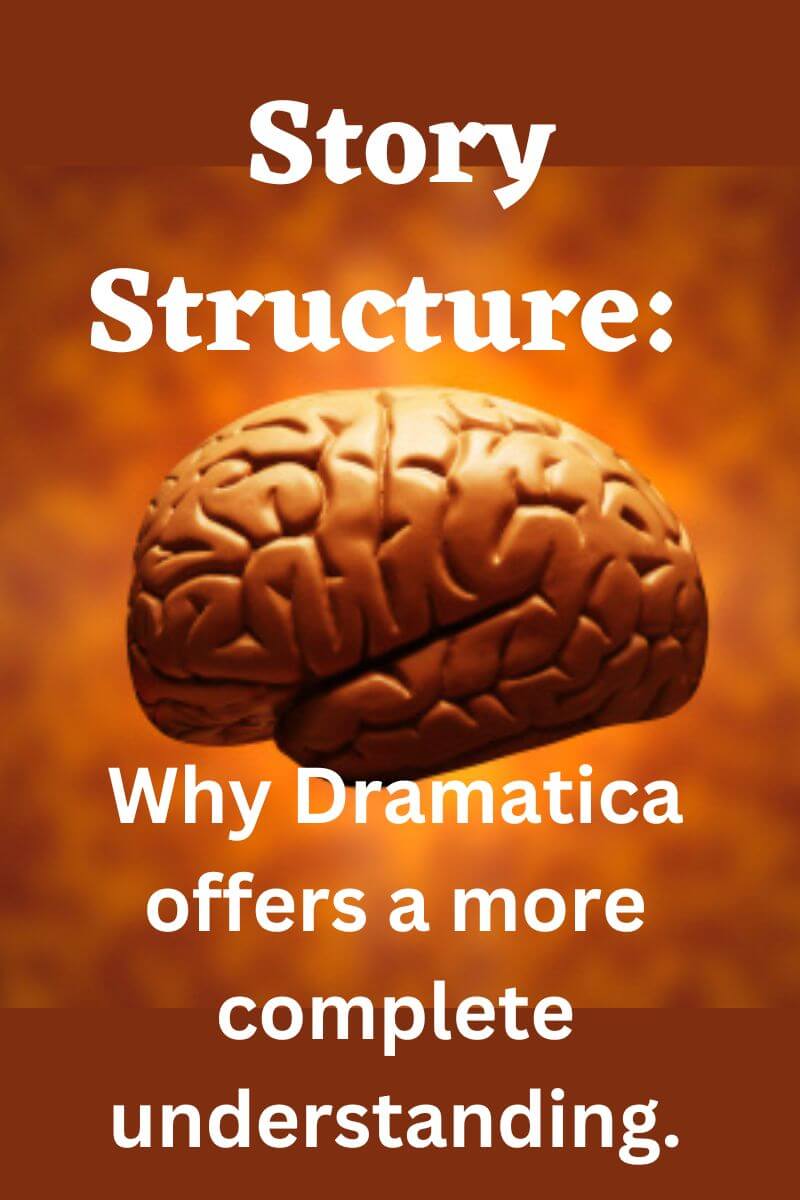 The most important thing you need from any story theory is help creating a good roadmap for your novel.

Specifically, you want help creating a plot that will keep the reader engaged and bring the story to an emotionally satisfying conclusion. You want to map out how and why your characters are going to grow and develop – the emotional journey of your book. You want to decide what themes your novel will explore, and make sure the final draft delivers a message that rings true. And you want to make sure that these elements tie together well.

You especially want a clear story structure that will guide you through those times when you get stuck and haven’t the faintest idea which direction to head next. Unfortunately, traditional theories have some serious limitations. Let me explain…

Traditional Story Theory Is Too General

1. Every good story has a beginning, a middle, and an end.

2. The incidents that make up the plot are linked by cause and effect.

3. A story is about a “change of fortune” for the protagonist.

Aristotle’s theories were taken a step further in the 19th century by Gustav Freytag, who had more examples to draw on than Aristotle, including the plays of Shakespeare. Freytag described story structure this way:

1. The Inciting Incident. Every story begins with an event that gets the story moving and introduces the main problem or conflict.

3. Climax, Crisis, or Turning Point. At the height of the drama, an event occurs that represents a change in the protagonist’s fortune.

5. The story ends with a Catastrophe (in the case of a tragedy) or some other Resolution (such as a happy ending) which shows the protagonist’s downfall or triumph.

Aristotle and Freytag’s ideas are still valid today and can help you plan the broad structure of your story. But they fall short of meeting your needs in other ways.

For example, they describe a story as a single, linear series of events, whereas novels are often complex creations that progress along on several levels at once. The main character’s inner journey, for instance, often runs parallel to the plot. And then there is the issue of subplots, and how they connect and relate to the main plot.

As writers and novelists, we want help creating a story structure that works on all levels, and in making sure all aspects of a book are integrated properly.

The other problem is that traditional story theory offers you only a few signposts along the way. You have three basic events: an inciting incident … a climax … a catastrophe, which correspond to the beginning, middle, and end. Yet the bulk of your story actually occurs in the vast spaces between these events. How you should go about filling these spaces is a mystery. The theory tells you only that the spaces contain a “series of events” in which things are either working out for the protagonist, or not.

I should acknowledge that more recent writers have identified a few variations on this basic story structure, such as the “W” plot. However, the newer models still suffer from the same problem: a few signposts, but not much advice on how to get from one to the next.

Consequently, once you’re past the inciting incident, or the first chapter, a novel can seem like a dark and dangerous forest. As a writer, you must blaze a trail that will take the characters and the reader safely to the climax in the centre of the forest, and then out the other side.

However, with no guidance, forging this path often becomes a process of trial and error with many deadends and pitfalls along the way. Many a novel has been left unfinished because the writer got lost partway through.

Of course, many writers and theorists have tried to devise more detailed descriptions of story structure to guide writers through the long, dark stretches of a novel. But most of them have their own problems...

The Risk of Clichéd and Formulaic Plots

The approach most theorists take is to study great stories, identify the common elements, and group them into models such as...

“Genre” is a term often used to describe stories according to their external characteristics, such as setting (Western, Medieval, Science Fiction), audience (young adult, women's fiction), or the type of problem the story deals with (murder mystery, romance, war).

If you were to list all the possible story genres you have come across, I doubt the total would be more than 100. (That's roughly the size of the biggest list I have seen to date.)

You certainly could choose to write a novel that falls within a certain genre (if for no other reason than because genre fiction often pays better), which may mean following certain rules or a well defined formula. However, the really memorable novels are generally those that break new ground, that defy the existing formulae. And that gives the formulae only a limited degree of usefulness.

Theorists who look more at the deeper levels of stories often identify story structures that can be found within a variety of genres. You will find many books, articles, and seminars discussing anywhere from 1 to 36 archetypal plots.

However, we prefer to see a story as a journey through a deep forest, where an almost infinite number of paths could take you to a satisfactory conclusion. Given that, do you really want to limit yourself to a handful that have been trodden so often that they can be easily recognized?

To put it another way, there have been many thousands of great stories written throughout human history, and there are no doubt an infinite amount that will be written in the future.

However, if writers limited themselves to just three dozen story structures, it would not bode well for our profession. We all have had the experience of reading a novel or watching a film and realizing we have encountered the same story a hundred times before, albeit dressed up in different ways. Often that's the point at which our interest starts to fade.

Good writers know that, to keep their audience engaged, they must avoid overworn and predictable story structures. We can't confine ourselves only to the tried and true.

Besides, I'm guessing you don't just want to find a structure that works. You want a structure that best fits the story you want to tell, one that supports your writing an original piece of fiction. Your story may have elements of several different genres, or be in a category of its own.

This is why we prefer Dramatica. With over 32,000 possible story structures, Dramatica gives you the best chance of not only finding one that works, but one that ideally fits the story you want to tell, and without being predictable.

Are there any drawbacks? Well...Dramatica has a reputation for being rather complex and time-consuming to learn. In that sense it's a bit like physics. It can take many years of study to understand physics, and even then there are many problems physicists have yet to solve.

But you don't have to understand physics to use it, as you do every time you throw a ball or operate a computer.

If you want to understand Dramatica theory, we can direct you to sources that explain it fully. But if you want to write a novel, then we suggest you to the next article, Part 2: Choosing a Story Goal, which will start you using the theory in a practical way.

Do you have a question about story structure or any other aspect of novel writing? If so, visit our Questions About Novel Writing page to get the answers you need.

Compare Dramatica to other story models.