Writing an Outline of Your Novel*

The final stage of preparation - writing an outline for your novel - builds on everything you have done so far. So if you haven't yet read the following articles, you may want to do so before we go further:

Naturally, you don't have to follow these articles step-by-step in order. They are just a guide. But if you do, you will know a lot about your story, and will be well prepared to begin writing an outline – which will make the process of writing the first draft of your novel much easier.

Note that writing an outline may take some time. Don't try to do it in one afternoon. You may need to ponder, brainstorm, go for walks, play with ideas, etc. for many days until you discover the right plot events and the right sequence to put them in. And even after that, better ideas may still occur to you in the course of writing and revising your novel.

Also, don't take the following procedure for writing an outline as carved in stone. It is designed to help you with writing an outline that is dramatically sound, but not to dictate or constrain your creativity. Let your passion for your story be your ultimate guide.

Writing an Outline Stage One:
The Overall Throughline (Main Plot) 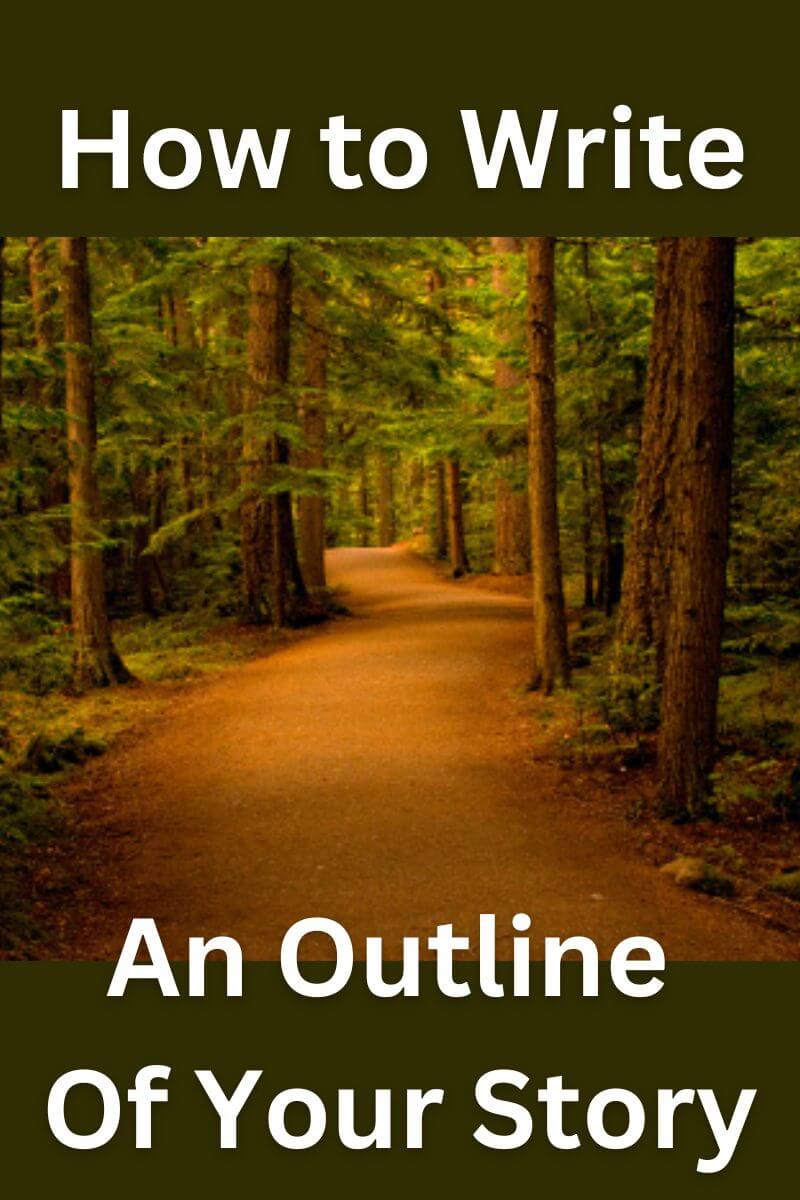 Classical story theory, set down by Aristotle, goes as far as saying a good story will have 3 main events:

A climax, crisis, or turning point

For this reason, most writers have traditionally followed a 3-act structure for their stories, with some exceptions. (Shakespeare preferred five acts; most modern playwrights prefer two.)

After a number of years exploring various story models, I have come to believe that the best model is actually a 4-act structure, based largely on Dramatica, with some insights from the W-plot.

In this model, the major turning points in a story are called "drivers," and there are five of them: Each of these is an "event," defined by Armando Saldana-Mora, author of Dramatica for Screenwriters, as an irreversible change in the characters' circumstances that is meaningful to them and gives them new and more important purposes.

1st or Initial Driver: also known as the inciting incident. This is the event, without which, the rest of the story wouldn't happen. Sometimes it is told in flashback or in a prologue if it happens long before the main character enters the story.

3rd Driver. Often this is a "point of no return" for the main character. From here on, turning around would be impossible.

5th and Final Driver: the moment when the outcome (happy or tragic) is decisively determined.

Once you have a sense of what the five drivers will be, you can start to map out the events that will happen in between the drivers. These events will make up the act.

So each act will be a series of events (or scenes) that show the characters reacting to the previous driver and set the stage for the next driver. The four acts follow the basic pattern of a dramatic arc, which is...

Dramatica calls each of these four parts "signposts," which is a little misleading since they are usually a sequence of events rather than a single event.

So the overall or external plot of a story looks like this...

Here the story problem is established (the threat or opportunity that presents itself). The main character will be introduced here, along with the setting.

In act two, obstacles and complications arise as the main character pursues the story goal.

In act 3, everything builds towards a crisis. The characters may start to run out of time or options to solve the problem.

In a story with a happy ending, this is the point where the main character takes control of the situation and starts working towards a victory. In a tragedy, all the main character's achievements will unravel in this act as it moves towards the final catastrophe.

If you have previously created a brief outline of your story using the 8 Plot Elements, you should review that outline and imagine how you can incorporate these elements into the above structure. For instance, some writers like to include each of the 8 elements once per act. Each act might have a forewarning, a requirement, a cost, a dividend, etc. Or you might just include each element once, it's up to you. 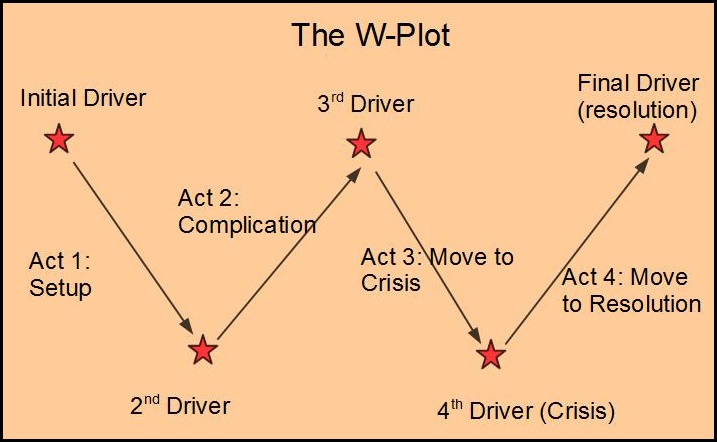 As you know by now, in the course of the story, your main character will face a dilemma of whether or not to change the way he handles whatever problems life throws at him. (See the articles on Plot Development and Main Characters.) In fact, his choice determines the success or failure of the effort achieve the Story Goal. As with the overall story, the main character's arc will consist of four parts or signposts...

This signpost demonstrates who the main character is when the story begins. In particular, it shows his/her habitual way of dealing with problems. It may or may not be a successful way, but it is his way. As with the other signposts, this event should be a meaningful, irreversible change that sets up the main character's inner conflict. It challenges his old way of doing things and puts him on the path towards change.

The second signpost show the main character increasingly pressured to change, to adapt a new approach.

The main character's personal crisis arises at the third signpost. He will be put in a position where he must either change or not change. There is no turning back or delaying the moment any longer. This is his personal turning point

The final signpost shows whether the main character's decision was good or bad. It reveals fate at the end of the story, one that either rewards or punishes his choice.

Of course, if you've read the article on, Main Characters you'll know that the second most important character is the Impact Character. In fact, the impact character is so important that the next step in writing an outline is to create a separate throughline to show his/her influence...

The second signpost of the impact character's story shows his deepening influence on the main character.

The last signpost in this throughline will show the impact character's fate at the end of the story. What happens here may confirm or deny the validity of the main character's choice.

The first event in this throughline establishes the relationship between the main and impact characters at the start of the novel. Remember that it too is an irreversible and meaningful change that puts their relationship on a particular path. (In a romance novel, this may be the moment when the two lovers meet for the first time.)

The second event complicates or deepens this relationship, taking it in a new direction (which can be negative or positive). (In a romance, this may be when the relationship first becomes romantic.)

This final event reveals how the relationship between the main and impact characters stands at the end of the story. (In a romance, it will be when the couple realize their love for each other.)

Writing an outline composed of the four throughlines – Overall, Main Character, Impact Character, and Relationship – will ensure you have a novel that is rich and satisfying. Of course, you may also have subplots which will to be mapped separately with their own 4-part structure. Also, we should note that some novelists give their main characters more than one impact character – so that the main character's dilemma isn't so much between his approach and someone else's but which of two people he should emulate.

Nonetheless, if you reach this point you will have have a minimum of 16 key signposts for your novel. As you may guess, the four “Signpost #1s” will make up your first act. The Signpost #2s will go into Act 2, etc. That gives you four Acts, and four key events for each one.

Your next step in writing an outline will be to decide what order to put the signposts within each act. This is entirely up to you. The important thing is that all the setups are in act 1, all the complications in act 2, etc. Each act therefore covers a different type of material. This principle, combined with the drivers, is what makes each act distinct.

If your outline feels detailed enough at this point, you can stop here and start the actual novel writing. As you write, you will of course need to create additional events to take the reader from one signpost to the next. But the advantage is that will always know what signpost you are building towards. That's a big improvement over Aristotle's three events, which leave a lot of empty space to be filled in.

However, if you are interested in writing an outline that is even more complete, you can go to the next level and flesh out the signposts a little more.

In essence, a novel can be described as one big event – a major change in the lives of the characters. In the telling, however, we break it down into a sequence of acts, each of which is composed of signposts.

Similarly, each signpost is an event that may be subdivided into three or four smaller events, becoming thus a sequence itself. Each signpost can have its own ...

Turning your 16 signposts into sequences will give you as many as 64 events or scenes for your novel - a well-planned roadmap indeed. What's more, these scenes will not be randomly chosen. Each scene will be a crucial part of a signpost, which in turn is crucial event in your story. Writing an outline this detailed helps ensure the first draft of your novel will be very tight, with few extraneous scenes and no missing steps. This saves you a lot of editing when preparing your final draft.

Of course, you may also want/need to include subplots or a few transition scenes. But generally, every chapter of your novel will lead compellingly to the next, with no sagging middle or unnecessary detours.

Now for the final step...

Writing an Outline Stage Seven: Putting your scenes in order.

Now that you have 50-60 events for your story (the exact number doesn't matter), your next step is to arrange them in order.

You already know which signposts go into which acts. If you have broken each signpost into four events, each act will contain roughly 16 events.

Taking each act in turn, you then decide the order your events will occur in your story.

Later on, when you're writing your actual novel, you may decide to tell the end of the story before the start. But it is better to get the sequence of events clear in your outline first.

That's about as much detail as we should go into in one article. Further information and help on Writing an Outline will be added later.

Do you have a question about writing an outline or any other aspect of novel writing? If so, visit our Questions About Novel Writing page to get the answers you need.

For the difference between a plot outline and a synopsis, click here.