Plot development is something you should think about after you have written a brief plot outline (Part 3). In this article, we're going to consider how to make sure the plot of your novel incorporates a major crisis and a satisfying resolution.

Many writers, especially pantsers, don't like to think about how their plot will conclude until they've written most of the first draft, preferring to let the ending evolve organically out of what comes before. Others may plan an ending ahead of time, but they prefer to rely on instinct, feeling, and a lot of trial and error rather than any kind of theory.

I believe, however, that you can save yourself a lot of time and effort in the long run by making a few decisions about plot development and the ending of your story early on, because that will help you write the crisis of the story. A good sense of where you are going increases your chance of getting there successfully.

Of course, your ending must make emotional and logical sense. It should be surprising, yet so connected to the novel as a whole that, in hindsight, it seems inevitable to the reader. Fortunately, certain plot development tools, called story dynamics, can help you create a great ending. It's simply a matter of answering a few questions, such as ... 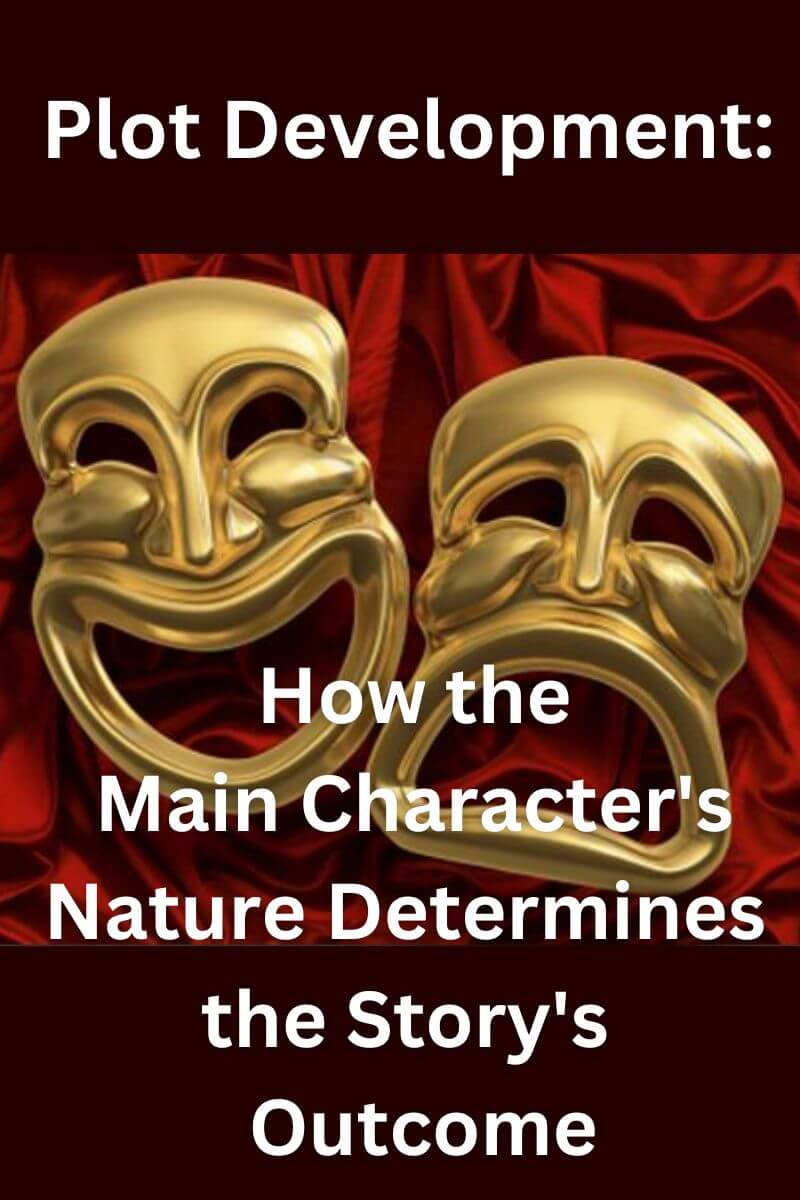 Will Your Novel End Happily, Unhappily, Or Somewhere In Between?

You may find this hard to believe, but – without at all becoming formulaic – story endings generally fall into four different categories. Just two simple yes/no choices determine which category your novel will fall into.

To make the first choice, you need to know your Story Goal or Problem, which is the foundation of your novel's plot. (By now you should have chosen a Story Goal. If you haven't, review Part 2: Choosing a Story Goal .)

With your Story Goal in mind, ask yourself what the outcome of your characters' pursuit of that goal will be. Will they, in particular your protagonist, achieve the Goal? Will they solve the Problem?

If the answer is no, then in classical terms, your novel will be a tragedy.

If the answer is yes, your plot will be what classical writers called a comedy, regardless whether or not it is humorous. (“Comedy,” before the advent of movies, simply meant a drama that ended happily.)

You may already have a feeling about whether the story you are working on should end happily or unhappily. If you are uncertain, try asking yourself the following plot development questions.

Do I want my reader to understand or learn from my characters' failures, or from their successes?

Of course, not every story fits into the neat categories of Comedy and Tragedy. Many stories have bittersweet endings that lie somewhere in between. Just as justice depends not on the letter of the law alone but also on the spirit of the law, the impact of a story depends not just on what happens but also how we feel about what happens. So, the second choice you must make in regards to plot development is whether your outcome should be seen as good or bad.

In some stories, characters may fail to achieve the Story Goal, only to find that their failure is a good thing. For instance, the Alfred Hitchcock film, Rebecca, tells the story of a woman who marries a rich widower. She tries fill the shoes of the first wife, but fails utterly. Yet, that failure turns out to be a good thing. She finds out, in the end, that her husband hated his first wife and loved his new wife because she was so different. Melanie Anne Phillips calls this type of plot a Personal Triumph, but the classical term invented by Aristotle is “Tragi-comedy.”

In other stories, characters may achieve the Story Goal, only to discover that the goal was not worth achieving. For instance, King Midas might achieve his Goal of turning everything in his house into solid gold, but if that includes his beloved daughter, we would judge his success as bad. There is no classical term that truly suits this type of story, so we'll call it a Comi-tragedy. (Melanie Anne Phillips calls it a Personal Tragedy, which also works.)

Based on these two choices – outcome and judgment, the four possible endings of any novel plot are as follows.

1. Comedy (happy ending): the protagonist achieves the goal or solves the problem, and his success turns out to be a good thing.

2. Tragedy: the protagonist fails to achieve the goal, and his failure is a bad thing.

3. Tragi-comedy (Personal Triumph): the protagonist fails to achieve the goal, but his failure turns out to be a good thing.

4. Comi-tragedy (Personal Tragedy): the protagonist achieves his goal, but his success turns out to be a bad thing.

You may want to play with all four options in your imagination for some time before deciding what type of ending feels right for your novel.

Plot Development and the Crisis

You may think I am putting the cart before the horse by talking about the story ending before the crisis. However, it's really a matter of preference. If you know you want a particular type of ending, then you will need to create a crisis that will set the reader up for it. On the other hand, if you already have decided what happens at the crisis, that will determine the ending.

Traditional theories of plot development define the crisis as the moment of greatest emotional tension in a story, and the point at which the protagonist's fortunes turn. However, Dramatica theory gives us a more precise and practical definition.

Here's what really happens at the crisis of a plot. The main character, in pursuit of the Story Goal, arrives at a tough situation. He or she then makes a decision or does something that determines decisively whether or not the Story Goal will be achieved. More precisely, he decides whether or not to change himself or his behaviour.

You see, your main character – that is, the character through whose eyes the audience sees the story – will have a particular way of trying to solve problems that is key to the plot development. With some characters, it is a type of behaviour. With others, it is a personality trait that either helps or hinders them.

However, when the chips are down, when you put your main character in the toughest possible situation, he must choose to either stick with his way, the tried and true, or switch to the alternative. If he switches, he may give up his habitual behaviour, or adopt a new behaviour. He may have to give up a personality trait or take on a new one. Each choice carries the risk of failure.

So now we can define plot development more precisely in terms of our four types of endings.

1. At the crisis of a Comedy, the main character either ...

- sticking with a good trait/behaviour

- giving up a bad one

- taking on a good one

... and that leads to a successful outcome.

(E.g. Harry Potter succeeds in defeating Voldemort because he sticks with his habit of putting others' lives ahead of his own.)

2. At the crisis of a Tragedy the main character either...

- sticks with a bad trait/behaviour

- gives up a good one

- takes on a bad one

(E.g. Macbeth fails to truly embody the role of king and establish a dynasty because he becomes a habitual murderer and betrayer, making his subjects want to depose him.)

3. At the crisis of a Tragi-comedy, the main character will make a choice that leads to his failure to achieve the goal. Yet, he will resolve his inner conflict in a way that leads to him personally ending up in a better place or find satisfaction.

(E.g. In the science fiction movie, Bladerunner, the main character fails in his mission to “terminate” all the artificial people on earth, because he develops compassion for them – which is a good thing.)

4. At the crisis of a Comi-tragedy, the main character makes a choice that leads to the story goal being achieved. Yet he will fail to resolve his inner conflict in a way that leads to him being better off or finding satisfaction.

(E.g. In Romeo and Juliet, the goal of ending the feud between the Capulets and the Montagues is achieved, but Romeo's unwillingness to give up his love for Juliet results in both their deaths.)

That's a lot of theory to take in a once, but here's how to apply it simply. Take a look at the plot summary you wrote and ask yourself the following plot development questions.

What kind of story do I want to tell?

Will characters succeed in achieving the Story Goal?

Will my main character be someone who changes or sticks to his guns?

If my main character changes, how will he/she change?

Will the outcome be good or bad for my main character?

Now take some time to write down various ideas for a crisis and an ending to your novel.

Keep in mind that, while the crisis is the moment when the decisive event occurs, plot development is a process that occurs throughout your novel. The reader must see how main character is/behaves at the start of the novel, and see how his nature is challenged in the course of pursuing the story goal. After the crisis, you must show the reader how the outcome occurs, and how it is good or bad for the main character.

After you have decided on these plot development issues, revise your plot summary to reflect your story dynamics.

Then move from Plot Development to Part 5: Creating Archetypal Characters.

Do you have a question about plot development, story endings or any other aspects of novel writing? If so, visit our Questions About Novel Writing page to get the answers you need.