The Story Goal: Your Key To Creating A Solid Plot Structure*

The first and most important element of any plot is the Story Goal or Problem. This is the organizing idea around which the entire plot of your novel will be based.

Without a goal, a plot becomes just a haphazard series of events with no meaning or purpose – one that will leave the reader wondering, “What was the point of that story?”

With a clear goal, the reader has a context that lets him appreciate the relevance of each event in the story. It allows the reader to become emotionally involved in your novel and to care about the outcome. In brief, it makes the story meaningful.

So what is a Story Goal?

Fundamentally, the story goal is “what the story is about.” However, we need to clarify that a little because a story can be about different things, depending on your viewpoint.

For instance, if you were to ask a literature student, “What is Shakespeare's play, Macbeth, about?”, he might say it's about “Ambition,” or “Fate versus free will,” or “hubris” or “Good government and divine kingship.”

That's because literature courses often teach you that a story is about its theme.

Theme is, of course, an important element of a story. But it's not what we mean when we talk about the story goal. To understand story goal, you must imagine you are asking someone who has no background in literature. If such a person had just seen Macbeth and you asked him what the play is about, he would more likely say something like, “It's about a Scottish lord who commits murder in order to make himself king.”

This is very close to the basic format for a story idea, which we discussed in How to Write a Novel Part 2: Finding and Choosing an Idea for Your Novel. That format, if you recall, was “somebody does something.”

But there's a difference. When we talk about the story goal, we are talking about WHY our protagonist does what he or she does. Macbeth kills the king because his goal is to become king. (In fact, he wants to found a new dynasty so his descendants will be kings as well.)

So, put simply, the story goal is what the protagonist wants to achieve, or the problem he/she wants to solve. 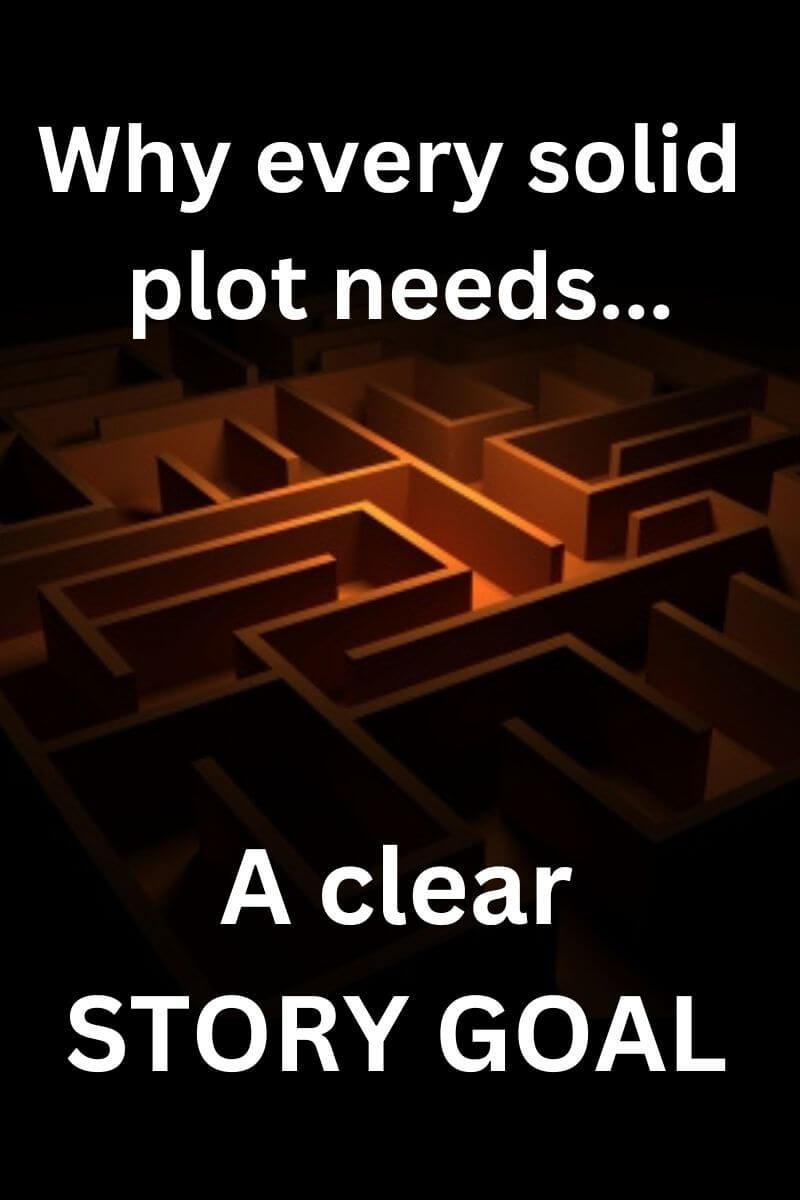 If you have an idea for a novel, then before you start outlining your plot, make sure you know what the story goal is. What does your protagonist want? What problem is she trying to solve? Why does he do what he does?

Step #2: Decide How The Story Goal Affects Or Involves Other Characters

It's easy to get confused when choosing your story goal, because a protagonist can have any number of goals or problems in a story. What distinguishes the story goal from any other goal is that the story goal involves many characters besides the protagonist. In fact, almost every character in your novel will have a stake in whether the story goal is achieved.

For example, classical tragedies were written about kings or great leaders because the entire country is affected by their actions. In Macbeth, for instance, all of Scotland suffers from having an immoral king on the throne. Many fantasy stories too are concerned with deposing a despot and returning a rightful and benevolent ruler on the throne.

Suppose, however, you're not writing about a king or a leader? Does that mean you can't write a great plot? Of course not. There are other ways in which a single problem or goal can affect or involve most characters in your novel. Let's consider a few examples...

War Stories. If you are writing a war story in which the protagonist is fighting for his side to achieve victory, then every character, regardless which side they fight on, has a stake in the outcome. The protagonist can be anyone from the king to the footsoldier, provided the success or failure depends on his actions.

The protagonist's comrades will join him in working to achieve the goal, while those on the other side will be fighting to prevent the protagonist's side from winning. But generally everyone, even those who choose not to fight, will be affected.

(Keep in mind that there are all kinds of wars, apart from those that take place in military settings. Competition among sports teams, corporations, neighbourhoods, or even siblings can give you provide plenty of settings for stories too.)

Mystery Stories. In a classic murder mystery, the protagonist is the detective who is trying to discover the identity of a murderer. In such stories, there are many ways in which other characters will suffer if the murderer remains on the loose. For instance...

* the wrong person could be convicted for the crime

* the detective or his superiors would lose respect

* the murderer would be free to kill again, thus putting other characters at risk

* if justice is not served, people's faith in the the social order will be weakened

Treasure/Quest Stories. Many stories have been written about the effort to find or control valuable or powerful objects, or to make sure these object don't fall into the wrong hands – again because the world would suffer if they did. Often these stories have many characters competing for the prize. Examples include The Maltese Falcon, where all the characters are trying to obtain a priceless treasure, and The Lord of the Rings, in which most characters are either trying to prevent anyone from putting a magic ring on his finger or else coveting the ring for themselves.

Love stories. In Pride and Prejudice, the goal is to obtain a good marriage. But it's not just the protagonist, Elizabeth Bennett, who has that goal. Her parents want her to make a good match as well. But most of the characters don't particularly care whether Elizabeth finds a good husband. Instead, they are concerned with finding spouses of their own.

Elizabeth's sisters, Jane and Lydia, for instance, try to find husbands. So does her best friend. Most of the men are seeking wives too, including Elizabeth's cousin (Mr. Collins), Mr. Wickham (for nefarious reasons) Mr. D'Arcy, and Mr. Bingley.

The same is true for many of Shakespeare's comedies such as Much Ado About Nothing or Love's Labours Lost. In these plays, the goal is for someone to find his/her true love. However, it's not just the protagonist who finds a perfect match. Many of the other characters are either seeking love for themselves or else trying to prevent true love from being allowed to flourish.

To take a few examples from films...

In Casablanca, all the characters – including even those who appear just for a brief moment -- are either fighting to leave Casablanca (an act that equates with obtaining freedom) or, in the case of the Nazis, trying to stop others from having that freedom. Victor Laslo, the protagonist, leaves Casablanca in the end, but it is made clear that freedom for him will lead to freedom for everyone. (Besides, other characters, including Ilsa Lundt, Richard Blaine, and Captain Renault also escape.)

In Miracle on 34th Street, the goal is to restore faith. The protagonist, an old man who calls himself Kris Kringle, must convince a little girl that he is Santa Claus. Along the way, he must also convince the entire city of New York to believe in him. However, other characters struggle with faith and belief as well. Kris's lawyer endeavours to convince the girl's mother to believe in him enough to marry him. The executives at Macey's department store struggle to have faith in a new policy that involves putting their customers' needs ahead of immediate profit. A young janitor struggles to believe he has something to offer others by playing Santa Claus.

In Notting Hill, all the inhabitants of a particular neighbourhood in London are failures in one way or another, yet very tolerant of each others' shortcomings. The story goal is to break out of that comfortable world and visit Hollywood where people are successful, but judgmental. The protagonist meets the goal by dating a millionaire actress who gradually introduces him to her world. In the end, he is her guest at the Oscars. However, his friends also enter the world of movies, at least in their imagination. When they drive the protagonist across London so he can profess his love to the actress, they have fun behaving like characters in a James Bond/caper film.

Once you have chosen your story goal – your protagonist's main objective – take some time to consider how that goal will be important to other characters in your novel. Are the people in your protagonist's world all struggling with the same kind of issue, for which they must either find or fail to find their own solution? Or are their hopes pinned on the success or failure of the protagonist?

Now let's look at how to Use your Story Goal Create a Brief Plot Outline in less than an hour!

Do you have a question about story goals or any other aspect of novel writing? If so, visit our Questions About Novel Writing page to get the answers you need.