The "Showing Not Telling" Rule

“Showing Not Telling” is one of the most basic rules of descriptive writing which you will encounter. It means that, rather than explain what happens in a scene, what the characters are like, etc. you should describe or present specific details. Now, that may seem like a subtle difference, but it makes all the difference.

When we explain something – when we “tell” what happened - we are removing ourselves from the action. Telling informs the reader. For example, imagine you are writing a newspaper article, telling readers about an accident that took place. You might say something like...

“A collision occurred at 10 PM last night on the corner of Pine and Maple streets when a sports car failed to stop at a red light. A blue minivan containing a woman and three children was struck on the drivers side.”

An account like this tells the reader what happened, to whom, when, and where. But it is somewhat dispassionate and objective. It presents conclusions about what occurred.

Showing is different. "Showing Not Telling" means describing the incident in a way that the reader can imagine himself actually there, seeing the action either through the eyes of one of the characters or possibly an omniscient narrator who is observing the scene firsthand. It presents sensory details that allow the reader to perceive the scene and action for himself and to draw his own conclusions as to what is going on. For instance...

“Carl gripped the steering wheel loosely with his left hand while his right hand scratched at the cellophane wrapper encasing his new CD. Why do they make these this stuff so difficult to remove? The hot air from the fan was stinging his dry eyes, and he took his hand off the wheel for a second to rub them.

“Blinking, Carl could see the next set of traffic lights glowing green in the distance. The street was empty and dark. He pressed the accelerator and felt his body being forced deeper into the seat cushion as the car accelerated. God, he loved this engine.

“In one more desperate effort, Carl dug his nails into the seam of the wrapper. He felt a sudden bump as the front passenger wheel struck a pothole. The CD flew out of his hand and disappeared onto the shadowy floor.

“Swearing, Carl took one more glance at the empty road. Then he leaned over and passed his hand quickly over the carpet, searching for the CD. Just as his hand felt the smooth plastic, there was a deafening sound and Carl's body shot forwards, his shoulder colliding with an airbag that exploded out of the steering column. The vehicle's motion had come to a sudden halt.”

As you can see, "Showing Not Telling" brings a story to life and is the basic technique for presenting scenes.

Anton Chekhov pointed out, showing the reader how "the broken bottle neck glitters on the dam and the mill wheel casts a black shadow.," provides a much richer experience than simply writing, "It was a moonlit night."

Similarly, rather than write, “Mrs. Grimes looked like a witch,” (which is a conclusion drawn by the narrator or point-of-view character), show the reader all the details he needs to reach that conclusion himself. Describe her crooked nose, the hairs sprouting from her brown warts, her musty, old-fashioned apparel, and her matted, steel-grey hair. Let the reader have the experience of seeing Mrs. Grimes first-hand.

Of course, you do need to exercise some judgement regarding when to apply the rule.

When To Use "Showing Not Telling" 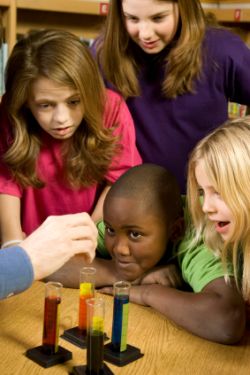 "Showing Not Telling" should be used when writing the key scenes in a story: the major events and turning points. These are the passages your readers live for. They want to experience them in all their detail and glory. You cannot, to take an obvious example, get away with telling the reader what happens at the climax. A sentence like "Then the hero defeated the villain" is just too disappointing to ever appear in print. The climax must be shown so the reader can experience it fully and emotionally.

If you're following the Dramatica model, you may have somewhere between 16 and 64 events in a full length novel (not including subplots), depending on the length of the book and the audience. As a general rule, these scenes should be shown rather than told to the reader. In some cases, you may show an event with merely a sentence or two: a whispered phrase, a gesture, or a sudden death. Other events may require entire chapters, but these are the events the readers love to experience through your words.

Of course, as with most rules, there are exceptions. “Showing Not Telling” can be over-used. Showing takes a lot more prose than telling. It can slow down the action. So when all you want is to make a quick transition between one important event and the next, simply “explaining” what happens in between can be more efficient than showing all the details

You also have to use good judgement to not bog the reader down by showing everything that happens in full detail. Focus the reader's attention on the important details in a scene by leaving out all the rest.

Good pacing also requires that the important events, the ones that matter most to the plot and the character arcs, are the ones that should be shown more fully. If you show trivial events in too much detail, it will feel to the reader that you are wandering off track. In such cases, you can just tell the reader what happens.

If you are interested in writing for film or video, I should also point out that "Showing Not Telling" is probably the most essential rule for screenwriters. Film is a visual medium in which techniques like voiceover narration are considered somewhat akin to cheating. You must convey the important points of a story through a picture. Ideally, it will be conveyed through physical action. Anything that can't be shown must be heard (dialogue etc.). Unlike in a novel, anything happening inside the character, such as thoughts or unexpressed feelings, cannot be directly conveyed in film.

In fact, "Showing Not Telling" has become a bigger element in novels over the last century or so because of the influence of screenwriting. Popular novels tend to be written more like screenplays - and not just because the author is hoping to sell the film rights later on. We have simply become a more visual culture, and that means writers need to be "Showing Not Telling" more than they would have before film was invented.