The Basics of Writing Dialogue

For some, writing dialogue feels as easy as floating downstream. Line after line tumbles out onto the pages of a first draft and the biggest challenge is whittling it down later. For others, dialogue is like a champagne cork that refuses to leave the bottle with out a lot of initial strain, but eventually gushes. Yet others feel that dialogue is like a plasticine model that must be gradually built up and shaped. And a few write dialogue because they feel they must, but would rather not.

Let's begin with the basics of what dialogue can do for your novel and why you should learn to write it well...

How Dialogue Benefits Your Fiction

Regarding that last point, if your character needs to learn some information from another character, writing dialogue is usually the easiest way to make that happen. But if you just want to let your reader know something that the characters already know, it's best to convey that in regular narration. (The exception is if you are writing a play or screenplay, where narration isn't an option.)

Writing dialogue is also a way to "show" rather than "tell," because you are letting the reader hear the exact words the characters say, rather than giving them a summary.

The Challenges of Writing Dialogue 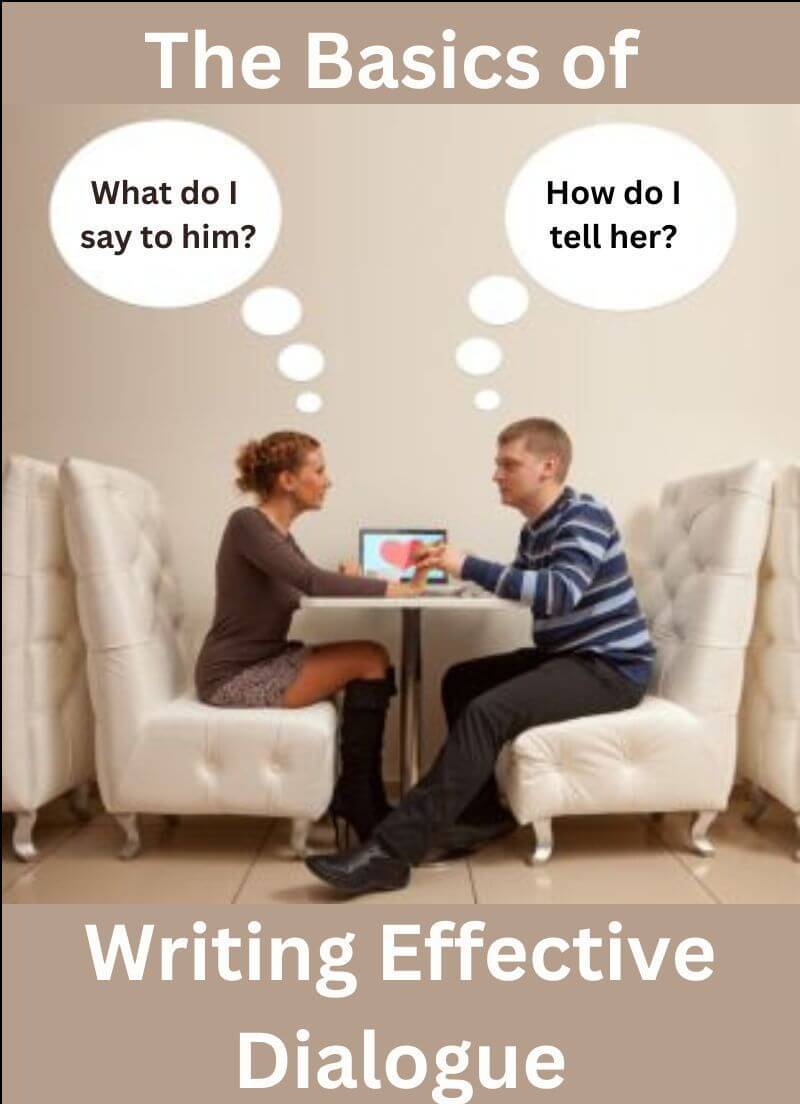 Good dialogue should do three things simultaneously. It should...

Some writers will use a stripped down form of dialogue in which nothing appears on the page except the actual words the characters say. Even quotation marks can be left out. The only guidance the reader gets is that a new paragraph begins whenever a new character speaks.

Such passages can be effective in a two-person scene where the only important thing going on is the words the characters speak. However, they can sometimes seem like disembodied voices in a vacuum. Also, they require the reader to work harder to keep track of who is saying what.

Most writers therefore choose to intersperse some narrative elements within the dialogue (or embed dialogue within narration). Dialogue narration can include...

Standard dialogue tags use the verb "said" (or "says" in present tense narration) along with the name of the speaker. For instance, "John said," "said Mary," "I said," or "she said."

You can also use a variety of other verbs in your dialogue tags, such as "replied, argued, cajoled, spoke, stated, exclaimed, cried, shouted, whispered, cautioned, interjected, asked, etc.

Most of the time, you are better off writing dialogue tags with some form of "said." Unlike other verbs, "said" doesn't call attention to itself, so it keeps the reader's attention on what the characters are saying, which is usually the important part.

Sometimes, you will see alternate verbs, perhaps coupled with adverbs or other modifiers to create more elaborate dialogue tags, but these can be a little distracting.

Let me give you an example. Here's a bit of dialogue that uses fancier dialogue tags...

"Yes," she responded with pleasure, "I decided to try something different."

I queried sincerely, "Is this the first time you've been blonde?"

I reassured her tactfully, "Well, it looks great."

As you can see, elaborate tags can sound a little pretentious. They can also be redundant. For instance, if a character's line ends in a question mark, do we really need to say he "queried." Similarly, if a character is being tactful, that should be apparent from his words. You shouldn't need to say he spoke "tactfully."

So lets now see how the same passage would look with standard dialogue tags...

"Thanks," she said, "I decided to try something different."

I said, "Is this the first time you've been blonde?"

As you can see, standard tags are less distracting. However, we can go a step further...

Not every line of dialogue needs a tag, and unnecessary tags can also be a distraction. So feel free to eliminate tags when they are not needed. Here's that same passage with a minimum of tags...

"Thanks,” said Mary. “I decided to try something different."

"Is this the first time you've been blonde?"

With just two characters, a couple of tags near the start of the dialogue can be enough to establish the speaking order.

In longer passages, you may want to insert a tag now and then, just in case the reader loses track of the order. And if you have more than two characters in a scene, you may need more dialogue tags.

When to Use Non-Standard Tags

Of course, non-standard tags have their uses. For instance, an occasional adverb can signal when a character's attitude is opposite to his/her words. For example...

“What a gorgeous dress,” she said sarcastically. “It really suits your figure.”

Here, the reader might not recognize the sarcasm without the adverb. Similarly, you can use a tag like "I said tactfully," to let the reader know that your character thinks he is being tactful, when in fact he isn't.

Sometimes, using alternative verbs can also add clarity, as in...

“I've never seen that woman before in my life,” I lied.

When writing dialogue, you can also use other narrative elements besides tags to identify speakers. Among the possibilities, action beats are the most useful.

Action beats are small, distinct actions that a characters does. When an action beat appears in a paragraph that also contains a line of dialogue, the reader assumes that the character who does the action also says the line.

Let's take the above dialogue and put action beats in place of dialogue tags...

Engrossed in her book, Mary didn't see me at first.

I plopped onto the bench next to her. "You've changed your hair colour."

"Thanks." Mary smiled and brushed the long tresses away from her eyes. "I decided to try something different."

"Is this the first time you've been blonde?"

I reached over and pinched one soft golden lock. "Well, it looks great."

The big advantage of action beats is that they reinforce the reality of the scene. Instead of two voices speaking in a vaccuum, beats show us that these are real people dong things in a real environment.

Of course, using action beats with every line of dialogue can also become a distracting pattern. So when you're writing dialogue, it's a good idea to add variety by using speech tags and action beats at different times, and leaving them out when you don't need them.

As mentioned above, dialogue is like real speech without the boring bits. So it's a good idea to cut any lines that don't advance the plot or develop the character relationships. For instance, lines like "Hello" or "Good-bye" usually are a waste of space. So let's tighten up our sample dialogue by taking out unneeded lines...

Engrossed in her book, Mary didn't see me until I plopped onto the bench next to her.

"Thanks." Mary smiled and brushed the long tresses away from her eyes. "I decided to try something different."

I reached over and pinched one soft golden lock "Well, it looks great."

Of course, there's more to writing dialogue, but that's enough for now. 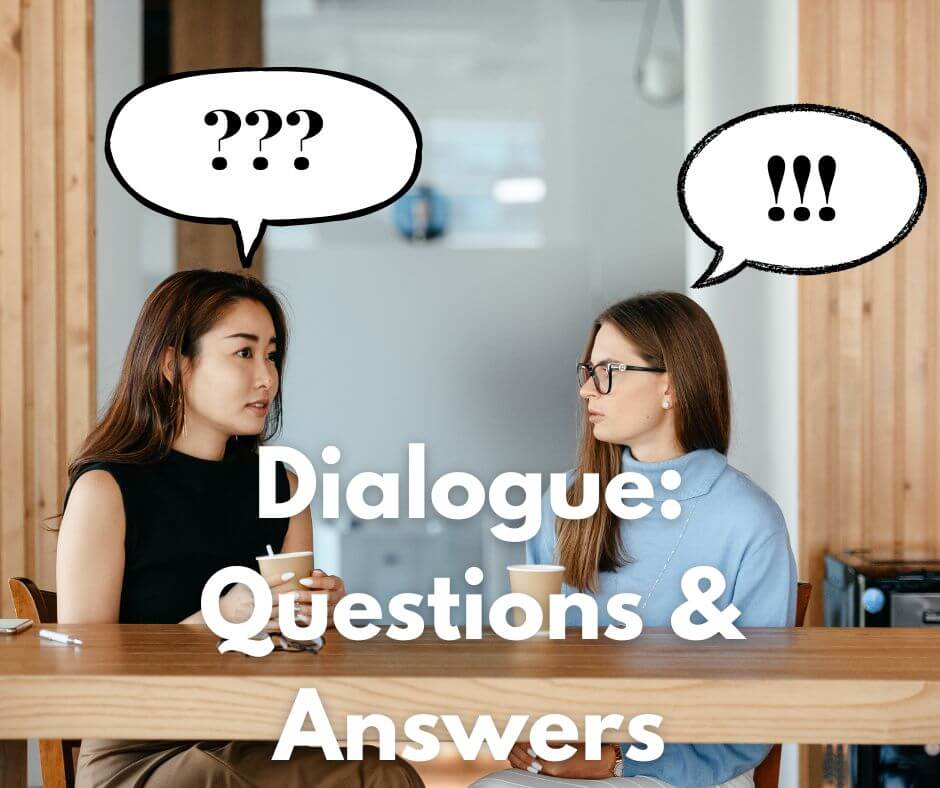 A discussion of visitors' questions on the subject of writing dialogue. 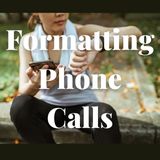 Q: How to format a telephone conversation? (A: It depends on your narrative mode)