Writing instructors will usually tell you to avoid using the passive voice unless you have a specific purpose or effect in mind. Otherwise, you should use the active voice as much as possible. So let's consider what we mean by these terms and how you can use them to improve your writing.

When you use the active voice, you tell the reader directly who or what is doing the action. Sentences in active voice follow the pattern in which someone or something (noun) does something (verb). The do-er, the person or thing that does the action, is the subject of the verb. For instance...

“The boy threw the ball. It ricocheted off a lamppost and landed in the fountain with a splash that drenched a sleepy pigeon.”

Here the do-ers are specified: the boy, the ball, and the splash.

“The ball was thrown by the boy. A lampost was ricocheted off of by the ball. The fountain was landed on, and a sleepy pigeon was drenched by the splash.”

In this version, the subjects of the verbs are: the ball, the lampost, the fountain, and the pigeon.

People usually speak or write in active voice because the active voice is more specific. It communicates a clearer understanding of what's happening. It also sounds better. In fact, in the second example, only the last part, “a sleepy pigeon was drenched by the splash,” has any aesthetic appeal. The rest, though grammatically correct, feels awkward.

However, while you should stick with the active voice as much as possible, there are two situations where the passive voice can serve a useful purpose.

Using the Passive Voice to Conceal the Do-er's Identity 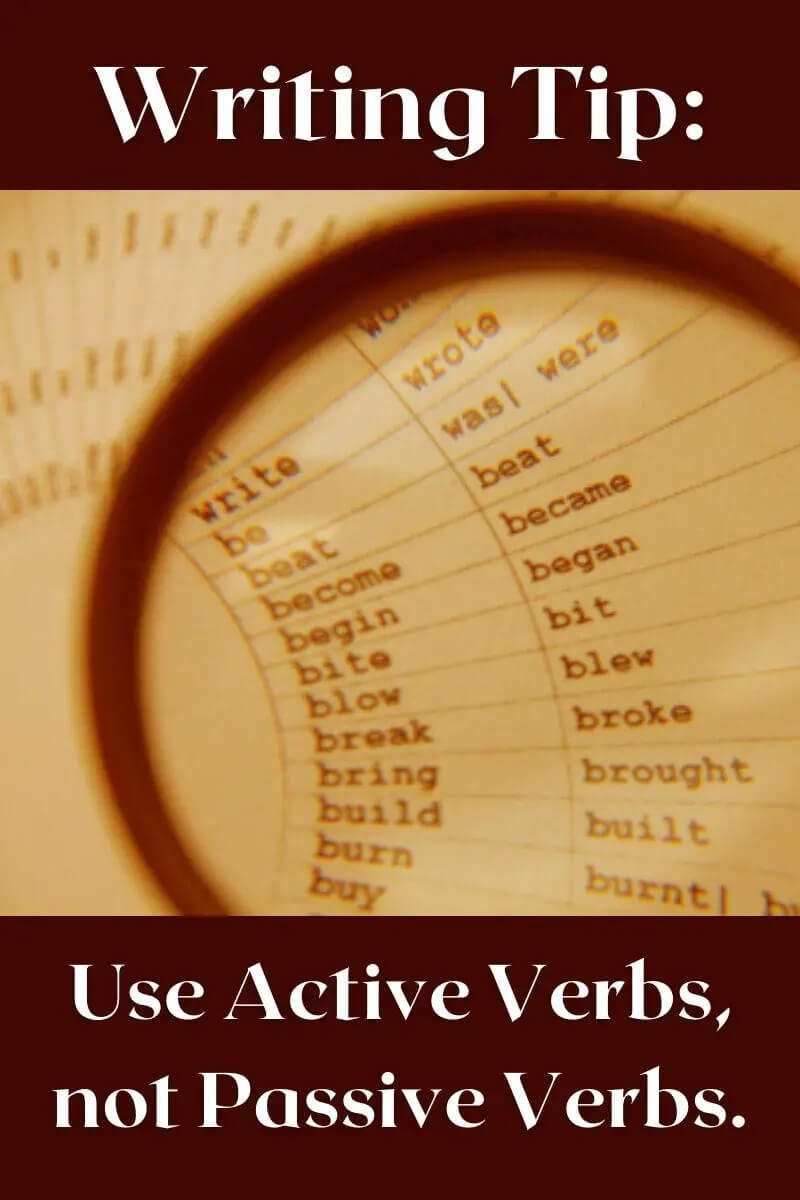 Writers use the passive voice most often when they want to conceal the identity of the do-er. Sometimes they do this to avoid laying or admitting blame. For instance, consider the difference between...

The speaker in the second example admits no guilt regarding the accident.

People who write for governments, corporations, and other organizations will often use the passive voice to dodge issues of culpability or because they want to protect the reputation of the organization. Consider a sentence like...

A. “Certain safety protocols were rendered more flexible in order to maximize productivity.”

B. “The company owner cut corners so he could make more money.”

Most people would say the second sentence expresses a clearer and more accurate understanding of what happened, yet the first sentence is much more likely to make it into a press release or annual report.

In fact, even when using the active voice, writers for organizations sometimes prefer to shift blame onto unconscious entities such as “market forces,” “the economy,” or “human nature,” rather than conscious, human decision-makers.

(Incidentally, one of the reasons people love comedians is because they are allowed to say the truth, including the truths that those in power try to avoid saying. Because they do it in a way that makes people laugh, comedians are free to point the finger at stupidity when the see it, and say “what oft was felt but ne'er so well expressed.” Great writers do this too.)

Unless you intend your book to be promotion or propaganda, you should be writing with the reader's best interest in mind. You want your readers to trust your words and to experience them as an accurate reflection of reality and/or human nature. You don't want readers to think you are trying to persuade them to believe something that may not be accurate. Whether you are writing fiction or nonfiction, your writing should tell the truth, clearly, plainly, and specifically. You especially should communicate the truth that has yet to be said.

Writing in the active voice is a way for your narrator to be open and upfront about the truth. The exception is if you are writing in the voice of a character who doesn't know or wishes to avoid saying who is responsible, as in “The gun was fired from the grassy knoll” or “mistakes will be made.” That's okay on occasions when you want to convey the narrator's limitations or personality. Just don't use the passive voice to be unnecessarily vague about your story.

Some studies have shown that people have a harder time understanding things written predominately in the passive voice. This is no surprise, since the passive voice is less specific and therefore less clear. It's harder to picture what is happening in a scene if you don't know who or what is doing the action. As we've said elsewhere, specificity and clarity make for stronger writing.

Another way to use the passive voice is to describe situations where the thing doing the action is not perceived to be a conscious entity. When we write “a sleeping pigeon was drenched by the splash,” it does not sound like we are avoiding assigning responsibility. Splashes are not conscious beings who act deliberately, so the passive voice makes perfect sense here.

However, you can often make your writing more interesting by treating unconscious entities as though they were do-ers. There's nothing wrong with putting the sentence into the active voice: “A splash from the fountain drenched a sleeping pigeon.”

Generally speaking, the more action you incorporate into your prose, the more you engage your reader's attention. With this in mind, writers commonly use the active voice to write about unconscious do-ers. For instance, it's practically a cliche to write a sentence like, “The sun beat down upon the rider's neck.” Readers will take for granted that the sun is not consciously trying to beat anything. And the sentence is more pleasing than, "The rider's neck was being beaten down upon by the sun.

On the other hand, treating unconscious do-ers as thought they were conscious gives you an opportunity to communicate something about your narrator or point-of-view character's personality...

“The sun beat mercilessly down upon the rider's neck, slowly searing his flesh, punishing him for his stubborn determination to travel in broad daylight and his stupidity that made him leave his hat at home.”

Now we are writing about the sun from the point of view of a rider who imagines the sun is a conscious being who is intentionally punishing him for his faults. This sentence tells the reader that the rider suffers from paranoia. By saying “his stupidity” made him act in a certain way, we show that this rider thinks of himself as a victim of his own nature.

Other Ways to Make Your Prose More Active

Apart from the issue of passive voice versus active voice, you can also improve your writing by choosing active verbs over copula verbs. For example...

This sentence is in the active voice. (To make it passive, you would write, “The soup was heated.") Yet, the verb “was” feels passive because it describes a state rather than an activity. You can add more action to your writing and make it more engaging by using fewer copula verbs such as “is,” “was,” “seems,” “appears,” “stays,” “feels,” or “sounds.” Replace these where possible with verbs that describe activity. For example, we could change the previous sentence to show heat through action...

“The soup bubbled on the stove.”

You can go a step further by replacing common verbs with more specific, less common verbs. Will your hero simply “run?” Or will he “scarper,” “dash,” “race,” “cantor,” “trot,” “lope,” “scurry,” or “sprint?” Each choice conveys a slightly different image.

“There were five men standing by the gate.”

Whenever possible, rewrite these sentences to be more active:

“Five men stood by the gate.

“Five men loitered by the gate.”