In Medias Res: An Ancient Secret for Beginning Your Novel

In medias res is a literary technique that dates back to Homer and dawn of Western literary tradition. The fact that it is used almost universally today shows how powerful the technique is. Essentially, it means beginning your story “in the middle of things” or in the middle of the action.

In practical terms, this means your novel should start at a point in the story where an important event is taking place. Something should happen in your very first chapter that changes the characters' lives forever. In classical terms, this event is called the “inciting incident.” Like all events in your plot, it will be (to use Armando Saldana-Mora's definition) an irreversible and meaningful change that gives the character(s) involved new purposes. 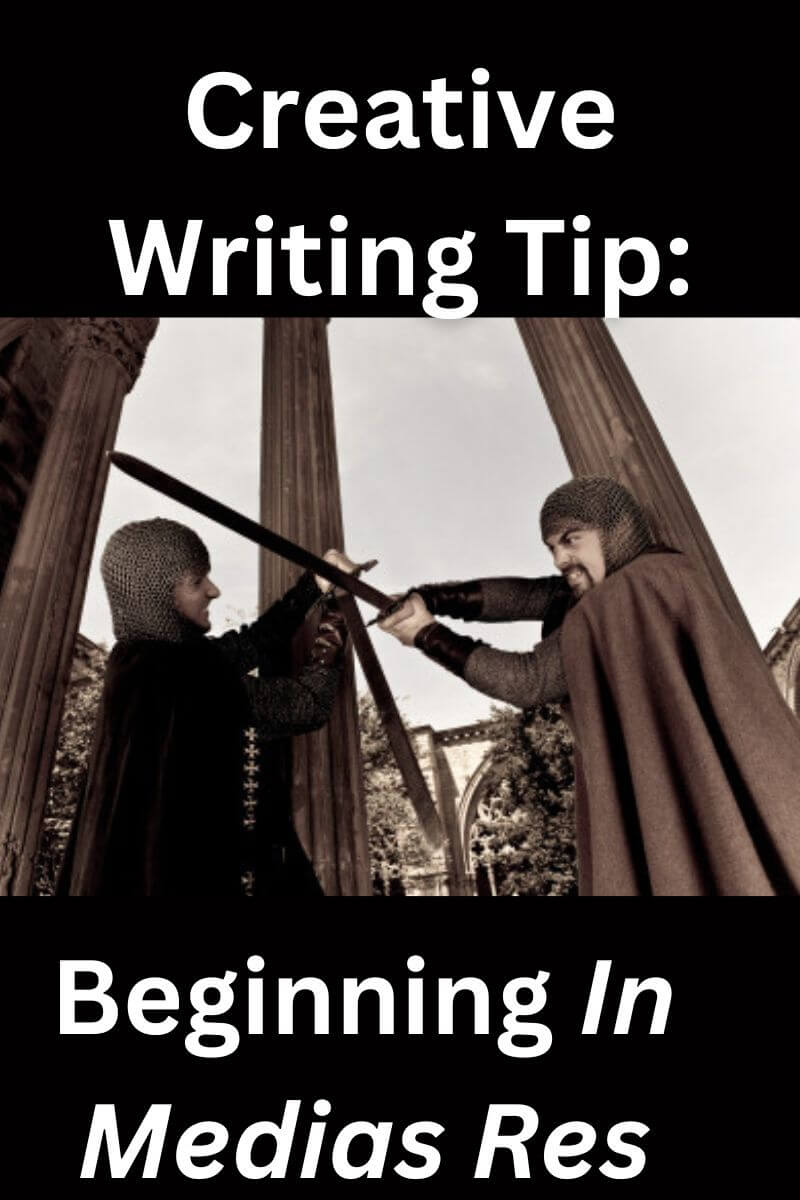 These days, conventional wisdom states that the best way to use in medias res is to plunge into the action on the very first page, if not in the first sentence. The theory is that you must grab a readers' attention quickly. If someone is browsing in a bookstore and flips to the first page of your novel, what they read should make them want to buy the book to find out what happens next.

I confess I'm not entirely convinced by this argument. I suspect most people buy a novel based on the cover (especially the description on the back cover or flaps) or on the recommendation of someone they trust. If they open the book, they are just as likely to look at a page in the middle as the first page.

However, it cannot be denied that many editors and agents will reject a manuscript if the first page doesn't grab them. These professionals look at so many manuscripts that they have to make snap decisions in the interests of time.

To be fair, beginning in medias res makes for a much more powerful and compelling opening for your novel. Too often, novice writers start their stories with unnecessary preamble that bores a reader and makes him stop reading. Unlike in the 19th century, today's readers generally don't enjoy ploughing through long pages of lyric description, philosophical musings, or exposition. Herman Melville may have gotten away with sticking an encyclopedia of whaling in the middle of Moby Dick, but that sort of thing is frowned on today.

For instance, let's say the event that kicks off your story is your protagonist getting fired. You probably shouldn't start your first chapter by having him wake up that morning, eat breakfast, brush his teeth, drive to work, say “Good morning” to his co-workers, reminisce about his family history, or do anything else that isn't actually part of the dramatic arc of the story. That's a sure formula for getting a rejection slip.

Instead, you might open the story in the boss's office with a shouting match taking place between the boss and the protagonist. Make it a big dramatic confrontation full of implications for the future, so the reader will want to know what happens next. Or perhaps you could start with the protagonist doing the thing that gets him fired and realizing what he's done. Either way, you will be showing a big change in his circumstances that will send him off in a new direction.

Sure, you will want to give readers some background to the story and the characters. But first you must involve the reader in the story, and that means starting in medias res.

You can always fill in the background a little in the second chapter or, even better, sprinkle in a few details here and there throughout the novel so they arise parallel to the action.

Alternative Ways To Use In Medias Res

Suppose you don't really want to start your novel with the inciting incident. Maybe you feel strongly that the reader should get to know the main character a little first. Do you have any options? Yes. As is often the case, Dramatica theory comes in very useful here.

If you've read the article on Writing an Outline, you know that, according to Dramatica, every complete story has four throughlines. Each of these four throughlines will have four major events called signposts. What's normally called the inciting incident is the first signpost of the Overall Throughline (which you can think of as the main plot),

To remind you, the four throughlines are...

Each of the throughlines has its own Signpost #1, and all four #1 Signposts will appear in the first act of your story. Yet, within that first act, it's your choice which signpost comes first.

For instance, instead of starting with the inciting incident of the Overall Throughline, you could lead with the first event in the Main Character Throughline. Show your reader a pivotal event that reveals who your main character is and how he/she tries to cope with a difficult situation. You'll still be opening in medias res.

Alternatively, you could begin with an event in which the main character meets the impact character for the first time – a turning point in their lives that establishes the relationship between them.

Or you could also start with an event in which the main character witnesses the impact character's approach to solving a difficult problem.

As long as you open with an event rather than preamble, you will be beginning in medias res.

Do you have a question about openings or any other aspect of novel writing? If so, visit our Questions About Novel Writing page to get the answers you need.