The main character is one of the two most important characters in your novel, and the only one most writing students ever learn about. Yet the emotional thread of your novel hangs on both these characters and their relationship, so you need to choose them wisely.

First, you must recognize that the term “main character” is often used in a rather imprecise way. To most people, it simply means the central figure in a story. However, the central figure of a story is often an amalgamation of several different roles. Realizing this gives you a tremendous range of options for your novel.

For example, in the novel, Huckleberry Finn, Huck is the central figure. He is the one telling the story. The story revolves around his quest to escape his tyrannical father and find freedom. Also, the reader sees the story entirely from Huck's perspective. We see and hear only what Huck tells us he sees and hears. Huck tells us his thoughts. But we don't know what other characters think, see, or hear.

While Huck is certainly the central figure, we can break down his role into three parts. He is ...

1. The Narrator: the entity telling the story.

2. The Protagonist: the character pursuing the Story Goal.

3. The Principle Point of View (POV) Character: the character through whose eyes the reader sees the story.

Of these three, the Principle POV Character is what Dramatica theory calls “the main character.”

You may certainly choose to have a character such as Huck Finn play all three roles of these roles in your novel. It is a well-established and effective option. On the other hand, you can assign these roles any way you choose.

Choosing a Narrator Who is Not The Main Character 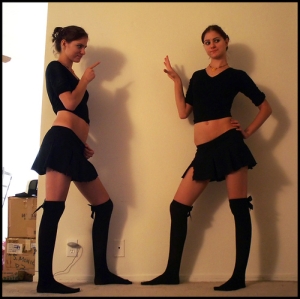 For instance, you may choose to have an omniscient narrator who is who is not a character in the story but who knows everything happening in the story world, including all the characters' thoughts. In other words, the narrator will essentially be you, the writer.

In the Harry Potter series (which I use as an example because so many people have read it), Harry is most definitely the main character. The reader almost always sees only what Harry sees. Only Harry's feelings and thoughts are described. Yet, Harry is not telling the story. The story is written in 3rd person. told by a narrative voice that has no real identity (other than Rowling herself). The advantage of 3rd person is that the reader can be shown things Harry is not aware of.

For instance, the first chapter of Harry Potter and the Philosopher's Stone, begins in Uncle Vernon's point of view. We follow his thoughts and observations. Then Dumbledore and McGonagall have a private conversation while waiting for Hagrid to fetch the infant Harry. Harry did not witness all these events, and was too young anyway to remember it.

You could also have narrator who is not omniscient but who is a minor character in the story world. Such a narrator would describe events from his personal knowledge. Keeping within the popular children's category for the moment, an example would be Lemony Snicket, the narrator of the A Series of Unfortunate Events novels.

When using a character narrator rather than an omniscient narrator, you must follow certain guidelines to make your story believable. First, your character narrator can only describe events he/she can believably be expected to know about. (The fact that Harry Potter could not have witnessed the conversation between Dumbledore and McGonagall may be one reason why J. K. Rowling chose to not make Harry the narrator.) Your character narrator must be someone who was either present at all the events in the novel, or who has interviewed witnesses or otherwise researched the events. He or she must be someone who knows knows the main character well enough to convey her point of view to the reader, or at least make an educated guess.

Of course, you may choose to use a character narrator specifically because of his/her limitations. A character narrator can jump to the wrong conclusions, misinterpret events, or even mislead the reader. A good example of the latter is Agatha Christie's mystery novel, The Murder of Roger Ackroyd, in which the narrator manages to hide the fact that he is the murderer until after he is caught. (Sorry if that spoils the book for you.)

Before you actually start writing your novel, ask yourself who the best person to tell the story is. It may be that your main character is best able to tell his/her own story, in first person. On the other hand, if you don't want to be chained to a single perspective, you may find it easier to use an omniscient narrator. For instance, if you are writing a romance novel, you will probably want to tell part of the story from the male romantic lead's perspective as well as the female's.

On the other hand (always think I should have at least three hands), you can choose some other character to be the narrator, but that will involve some special considerations.

Beyond Point of View

How can this be? Well, once it was common in history books to tell the story of a famous battle from the viewpoint of the general, admiral, or king – the person in charge of pursuing a victory. Today, however, it is more common to tell it from the point of view of a footsoldier. Similarly, many novels are told not through the eyes of the protagonist pursuing the story goal, but through those of another character who plays a different type of role.

Recall our list of Archetypal Characters. You can tell your story from the perspective of any of them. Imagine, for instance, telling the story from the point of view of the Guardian who is trying to help the protagonist, or the Skeptic who think the protagonist's plan is a waste of time. The character telling the story can have a big influence on how the reader experiences it.

You see there is something else that sets a main character apart from all others. This trait is one of the key insights of Dramatica theory.

As I described in the article on Plot Development, in an emotionally engaging story, the main character is the character who is forced to decide at the climax of the story whether or not to change. Throughout the novel, he or she wrestles with a problem. In that wrestling, he will try to solve that problem using his habitual approach to dealing with problems. However, but in the course of the story he is forced to consider that his habitual approach might not work this time. He will also be presented with a different approach which might be better. At the climax, he decides whether to stick with his habitual way or switch to the other way, and that decision could turn out to be good or bad.**

If a character narrator undergoes this crucial arc that emotionally engages the reader, then he/she is the main character. If not, the role belongs to another character. The narrator's job will be to describe that other character's point of view to the reader.

It may seem strange to separate the roles of protagonist and main character. We are generally taught that they are one and the same, and in many stories they are. However, there are plenty of examples where they are not.

For instance, let's consider Peter Schaeffer's play, Equus. In Equus, the most memorable character is a teenaged boy, Alan Strang, who develops an abnormal passion for horses. Most of the story centres around this character, and he is certainly the protagonist, pursuing the goal of transcendent spiritual/sexual ecstasy, in his own twisted way.

However, the story of Equus is narrated by the boy's psychiatrist, Martin Dysart. Dysart addresses the audience directly, telling the story of how his experience treating Alan Strang made him rethink the meaning of his own life – which is devoid of strong passion. Dysart relates conversations Strang is not privy to, and the audience never sees anything except through Dysart's eyes. In other words, Dysart is the main character and his crucial decision at the climax is whether to cure Alan of his abnormality, even if it means the boy will never again feel passion about anything, or to transit to a new way of being in which passion can play a role. In the end, Dysart is unable to make the transition. He chooses to cure Alan, and is left mourning his lack of courage.

The Other Important Character

I mentioned there was one other important character. As Dramatica theory has evolved over the years, the name of this character type has changed. First it was called the Obstacle Character, and later the Impact Character. More recently, Melanie Anne Phillips has taken to calling it the Influence Character.

Whatever name you choose, this character is extremely important to the emotional appeal of a story.

The impact character is important, because if the main character knows only one approach to solving a problem – his own – then he would have no reason to consider changing. It is the impact character who puts him into a situation where he cannot know the right action or decision to make until after the fact.

For instance, in Equus, Alan Strang is both the protagonist and the impact character, making Dysart question his approach to life.

To take another example, in Jane Austen's novel, Sense and Sensibility, the main character, Elinor, is a young woman who has fallen in love with a man named Edward Ferrars. A discrete woman, she chooses to keep her love a secret until Edward actually proposes.

The impact character is Jane's sister Marianne who, when she falls in love with a man named Willoughby, practically shouts her love from the rooftops.

For some time, it appears that Marianne's approach will be more successful. Willoughby seems to love her back and the couple seemed destined to marry. Meanwhile, Elinor discovers that Ferrars has been engaged to someone else for many years - a girl he doesn't know well, but feels obliged to marry out of friendship for her father. By keeping quiet about her love for Ferrars, Elinor seems certain to lose him.

Elinor has a tough choice to make – whether to do what she has always felt was right, or to follow Marianne's example. Elinor decides to stick with her discretion, and it turns out to be the right choice. Willoughby's family force him to dump Marianne and marry someone else, causing Marianne to suffer great humiliation, while Ferrars is eventually let out of his engagement and proposes to Elinor.

Once you have chosen your main character, consider which character might serve as the impact character, and how he/she could illustrate an opposite approach to solving the main character's problem.

**For more on the main character, see Plot Development.