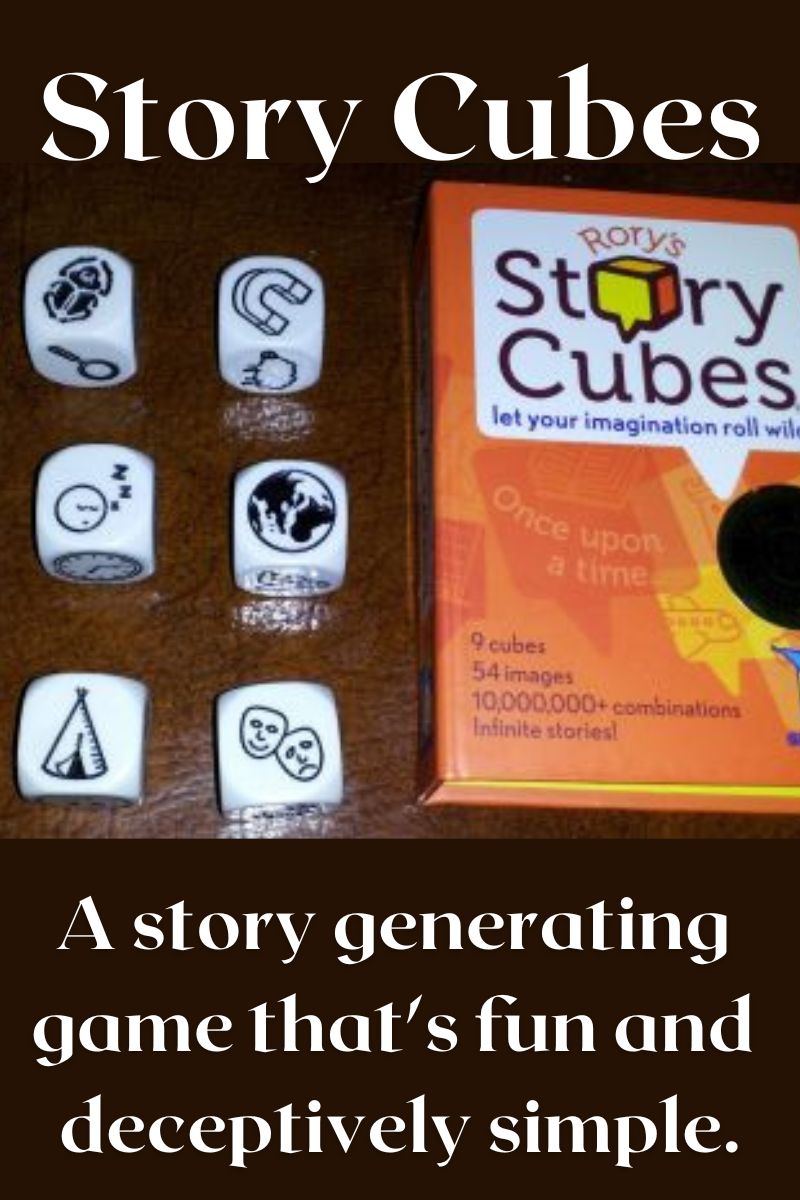 As idea generators go, Story Cubes are one of the easiest for writers and teachers to use. It also makes a fun party game you can play with your writer friends. Think of it as making your writing work more fun, or making your fun time more productive. Today, there are many different sets of story cubes available. Here I will be discussing the original or classic set, how it works and how you can use it as a writing tool...

If you've ever read Phillip Pullman's book, The Golden Compass, you'll recall that the main character, Lyra, used an alethiometer (or golden compass) to divine the future and get an answer to any question she had. The alethiometer consisted of a dial with 36 symbols around the outside. There were three needles that could be set to point at symbols that represented the topic of the question, and a floating needle that pointed to the answer.

You may wonder how the alethiometer could answer in infinite number of questions using only 36 symbols. Yes, I know it's fiction. But actually, the alethiometer works in a manner similar to many traditional forms of divination. Each of the symbols represents a generic concept with infinite levels of meaning. For instance, the symbol of a Camel could mean Asia, Summer, or Perseverance. The Beehive symbol could mean Productive Work, Sweetness, or Light. It was up to the questioner to interpret the answer.

Now, I don't believe it's possible to divine the future from such a tool, but it is certainly true that some writers have used similar systems of symbols, plus random selection, to help them generate original ideas and conquer writer's block.

For instance, some writers will lay out a random selection of tarot cards, or throw some coins to randomly generate an I Ching hexagram, or draw some random rune stones. They then create a story based on characters or plot events suggested by the symbols. I believe these systems can work because the human mind naturally tries to make meaning out of randomly generated concepts. Of course, you could also draw random words from a dictionary or pick random images from a magazine. But the symbols in divination tools have been created to represent distinctly different concepts, so you get a better contrast among ideas when using them.

Rory's Story Cubes is a similar tool, but one that has been designed especially as a story idea generator. It is much simpler than systems of divination (which often require many hours of study to gain familiarity). In fact, it is so simple that even young children can master it in a matter of minutes. Yet adults can also use story cubes to generate some very sophisticated stories.

Plus, story cubes have no religious or supernatural associations, which makes them less problematic than other systems.

A limitless source of story ideas.

Rory's Story Cubes consists of a set of nine small cubes, much like conventional dice. Each cube features a different image on each side, for a total of 54 images in the entire set. Like the symbols on the alethiometer, each of these symbols can have a nearly infinite number of meanings. You, as the creative writer you are, are free to interpret each symbol however you like - or in whatever way suggests an idea for a story.

For instance, if you were using story cubes to entertain or teach a group of children, and they rolled this symbol... 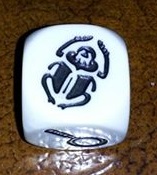 They might interpret it as a beetle and decide to put a beetle in their story.  Nothing wrong with a literal interpretation.

If a group of adults rolled this symbol, they might associate "beetle" with the Egyptian scarob beetle, which was a symbol of immortality and introduce an immortal being into the story, or a life-saving medicine. The beetle could represent someone from a poor neighbourhood (where cockroaches were common) or someone with a thick skin or someone who lived within an emotional shell. It could represent a shield, an armoured vehicle, a scavenger, a multi-limbed organization, an infiltrator, etc.

Let's say you rolled this symbol... 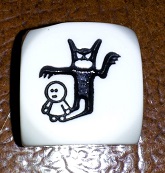 Here are three symbols in the set which seem to confuse a lot of people...

3 Story Cubes: How to interpret?

If you are from the UK, you will likely recognize the first as a learner's permit. Student drivers put this symbol on a car when they are getting a lesson. Of course, the symbol can also represent a carpenter's square, an alphabet block, etc.

The middle symbol can be a credit card, a letter, or any kind of document (diploma, will, speeding ticket, etc.)

The last symbol could be a compass or it could represent confusion or scattering. Again, you are free to interpret these symbols as you like.

Okay, now that you understand how the  symbols work, here's how you can use the cubes to create a story...

(As an Amazon Associate, this site earns if you purchase these products after clicking these images.)

There are many ways to use Rory's Story Cubes to generate stories. After a while, you might come up with your own approach. But for now, I'll show you one way that works for me.

Begin by using the cubes to get an idea for a main character.

Roll all nine cubes at once and see what symbols turn up. Look for one that appeals to you that will symbolize your main character. Maybe you will spot a symbol that suggests an occupation, a personality trait, or something in the character's background or appearance.

Next, choose one cube at random and roll it. (Set the others aside for a moment.) Whatever symbol turns up, take a moment to think about what it might mean for you. Now write a first sentence or paragraph of your story that includes the idea symbolized by the image on the cube.

Choose and roll a second cube. Write the next second sentence/paragraph of your story, incorporating this symbol.

Continue the process until you have used all nine cubes once. The last cube/sentence should bring the story to a conclusion.

If you are someone who really likes story theory, you can think of each cube this way:

However, that may be more structure than you need. The important thing is to relax and have fun with the cubes.

In addition to the basic set, there are several expansion packs. The Actions set is probably more useful for teachers than writers (each cube illustrates a common verb). However, the Voyages set can be used much the same way as the basic set. It's 54 images relate to journeys and vacations, but are general enough to work for many types of stories. There are also special sets, such as a Star Wars set, 3-cube expansion sets and sets geared towards writer of different genres.

After working with the cubes for a while, you may find they start to function like your own alethiometer, getting you out of stuck places in your writing.