Exquisite Corpse is a game developed by surrealist writers in the 1920s. The game lets you randomly create combinations of words which your own intelligence often finds meaning in. (The name of the game is one of the first images the inventors created by playing it.)

You can use this game as an entertaining party activity (with your writer friends), as a poetry generator, or as a way to create some unique imagery that can inspire your next story.

Here's how it works

The first thing you need to play this game is some lists of words. In particular you need nouns, verbs, and adjectives. If you are playing with a group of people, assign each person a number from one to five and give them the following tasks: 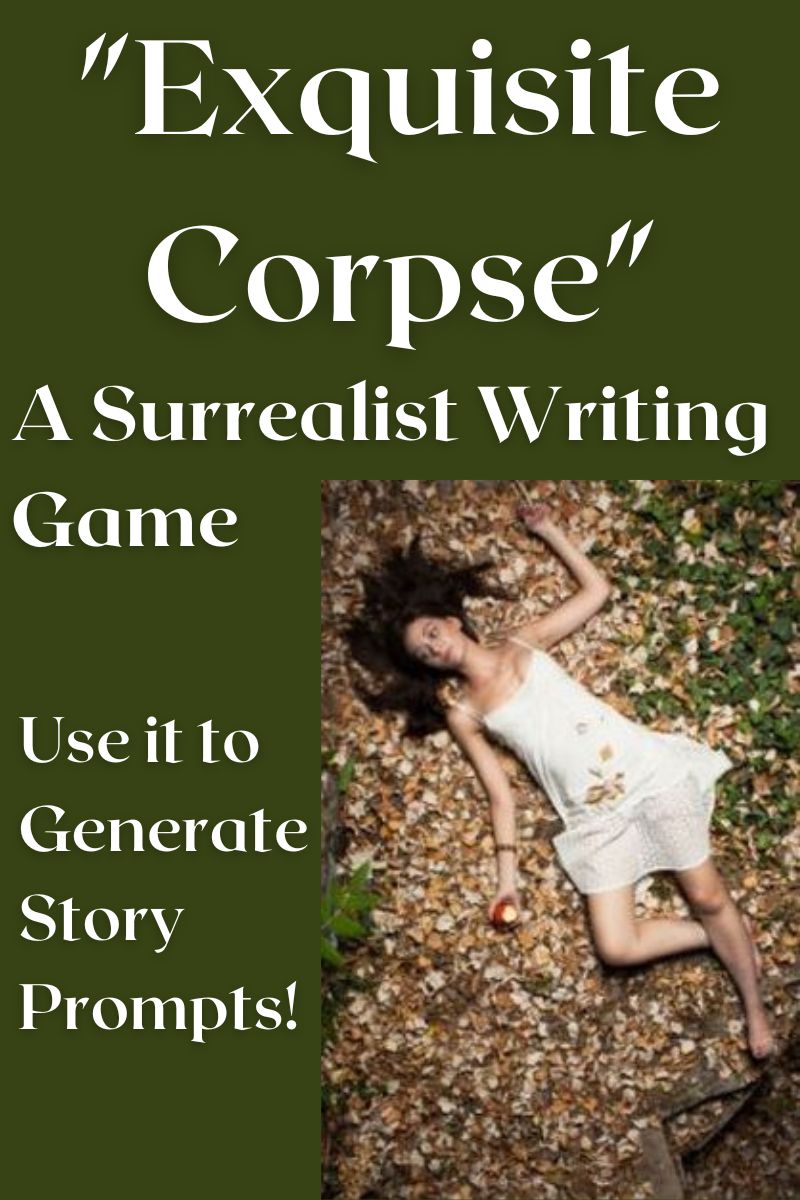 Person 1: Write down an adjective

Person 2: Write down a noun

Person 3: Write down a verb

Person 4: Write down an adjective

Person 5: Write down a noun

Don't tell them what will be done with these words, and don't let anyone find out what anyone else's chosen words are. You can encourage them to choose words that are interesting, colourful, or unusual.

If the group is small (five to ten), you can ask each person to write a small list of the type of word they've been assigned.

If you are playing Exquisite Corpse on your own, you can use a random word generator, or simply flip through a dictionary to find words. You can then write each word you come up with on a separate slip of paper and sort your words into a pile of adjectives, a pile of nouns, and a pile of verbs.

You can also use magnetic poetry words - divided into the same three piles. You may want to have another pile for adverbs, which are often included in magnetic poetry sets. Also, magnetic poetry often includes phrases as well as single words. You have to use some discretion when sorting the tiles, because some words can be put in more than one category.

Again, choose interesting words to go into your piles.

2. Randomly draw words, according to the following pattern.

The Exquisite Corpse game consists of creating a poem by selecting words according to the following pattern:

If you are working with a group of people, ask one of the people who received a #1 to contribute the first word, then one of the #2 people, etc. Don't call on people in a set order. You want the results to be as random as possible.

Write down the words in order. Each complete pattern is one line of what will be a poem. Five lines, or 20 words, is a good number for the exercise.

If you are playing Exquisite Corpse by yourself, simply draw words at random from your piles, so long as you stick to the pattern

If you are using adverbs, you can use this alternative pattern:

For example, I played Exquisite Corpse using Coyote Cult's random word generator as a source of random words, and this is what I got...

I also used some magnetic poetry tiles to randomly put together the following...

As I said above, some magnetic poetry tiles feature phrases rather than single words. Also, the fact that some of the tiles came from the crime fiction set, causes a built in bias.

I could repeat the process a few times until I get something that grabs me more. But I think it's worth pointing out that almost everytime you play Exquisite Corpse, you will get something interesting. All you need are a few images that are suggestive. Your natural inclination to find meaning in words will lead you to start thinking about the story behind the words.

Once you have your twenty-word poem, the next step is to add in any prepositions or articles (a, an, the) you like and change the verb tenses to make the resulting poem sound a little more like natural language. This is the first stage where your natural inclination to make meaning will come into play.

If you playing Exquisite Corpse on your own, you should feel free to make whatever modifications you need to create something that seems more meaningful. For instance, you might consider using a noun as a verb or changing a verb into an adverb, etc. You might also add a few other words.

Here's what I did with the first set of words I drew above, turning them into a piece of poetry...

The well-grounded corpus will spill a Danish eyeful.

In this example, most lines seems to be fairly unrelated, which is what you would expect with a random process. Sometimes, however, serendipitous results occur, and with a little editing some meaning starts to emerge. For instance, when I read the first two lines I start to see a political theme.

This is what I did with the second example...

In a dark room, by the grand piano, a stranger made off with my client, leaving the blame on my head.

At first, his touches were like a hot dance. But they left behind nothing but her tattered dress

Her beautiful soul found itself on the mean streets, where her longing voice whispered its sorrow to an alley cat's feline ear.

But soon, on the street, my intuition unwound itself, emerging from the shade with singular purpose.

I confess, was looking for a story when I did the editing. If your interest is in poetry, you might make different choices. And you might pay more attention to things like metre.

4. Find the story idea hidden in the imagery.

If you are interested in fiction writing, you can take the results of your Exquisite Corpse exercise and try to find a story hidden in the images. To do this, start by asking a lot of questions. What is going on in this story. Can you make any sense of these images?

Try to write a summary of what this story may be about.

For instance, my second example sounds a bit like a hard-boiled or noir crime novel. I'm imagining a detective, hired to protect a woman whose life was being threatened. Unfortunately, he fails in his mission. She is raped, abducted, and held prisoner in a dangerous part of town. When the ransom demanded by the abductor fails to materialize, he decides to murder her and escape, covering his tracks. But the detective has a burst of intuition that puts him on the right track to rescuing the woman in time.

Okay, it's a darker story than I generally write, but this is just an exercise.

At this point, we are moving well beyond the original Exquisite Corpse game in order to make it more useful for novelists.

With that in mind, the next is to compose a list of questions about this story. Your goal is to look at all the things that don't yet make sense so you can address them. Ask questions like...

Who is this woman who is abducted?

Why would the abductor assault her? This seems unnecessarily cruel. Or were they having an affair at first that led to a kidnapping?

What went wrong in the relationship between the abductor and the victim?

Why the grand piano? Does it have some significance?

Did she use the alley cat to send a message?

The abductor does not seem very professional. Could the crime have not been properly thought through? Why is that?

I would also have to build some relationships around the victim, so that the detective can analyze them and come up with clues that lead him to her location.

Try to come up with a number of possible answers for each question. Once you have a lot of ideas to choose from, you can pick the best ideas that work well together.

After you've chosen answers to all the questions that come to mind, you can summarize them into a more complete synopsis of your story idea. You may want to add in any of the 8 basic plot elements that are not yet present, to make sure your story idea is dramatically solid before taking it further.