How to Write a Thriller 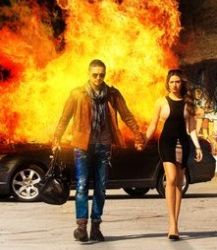 If you want to write a thriller novel or short story, most likely you are already a fan of the genre and a thriller reader -- either that or you have a particular field of expertise that has given you an idea for a story about a hero confronting a dangerous threat.

Either way, before you write a thriller, it helps to be familiar with the basic traits and structure of thrillers. So I'm going to review those, before suggesting one way you might approach writing a thriller story.

What is a Thriller?

In simple terms, a thriller is a story about a hero who uses his expertise in a particular profession to overcome a threat.

Thrillers share some similarities with other genres, particularly mystery, suspense, and adventure, and also some key differences. For example...

Like mysteries, thrillers often involve a puzzle that must be unraveled from various clues. However, mysteries are more about solving a crime that has already happened and identifying the perpetrator, whereas thrillers are about preventing a crime that has not yet happened, but which the villain is in the process of making happen.

Nonetheless, you will see a fair amount of crossover between these four genres. In fact, in recent decades the number of new adventure novels has declined to the point that many libraries and bookstores shelve adventure in the thriller section, while others lump thrillers, suspense, and mystery together under the banner of "crime fiction."

So when you write a thriller, you should feel free to incorporate some elements of mystery suspense, and adventure. At the same time, it is worth knowing the differences among these genres and what readers of thriller novels expect.

What Makes Thrillers a Unique Genre

Thrillers focus on a particular field of expertise.

A true thriller story takes place within the milieu of a particular profession and features a main character who uses his or her expertise in that profession to overcome the threat. They are full of technical details concerning the main character's profession and the world in which he or she operates.

One thing readers enjoy about a thriller is that gives them a way to learn the details about a profession other than their own, as well as its potential dangers. They like to imagine themselves in the shoes of a smart hero who overcomes tough challenges because of their unique skills and knowledge.

When you write a thriller, you must make sure you get the details of that world correct, so the story feels authentic and informative. Your hero should have specialized knowledge which the reader can learn through him. If you are not an expert, you must do your research.

In general, thriller stories tend to ...

While you may write a thriller about a non-human threat (such as a disaster story), most thrillers have human villains. They tend to be power-hungry or wealth-hungry individuals who will stop at nothing to achieve a goal that will harm innocent people.

In a thriller, the villain generally drives the plot. In other words, the major turning points in a thriller tend to be actions or decisions taken by the villain. In this sense, the villain is often the protagonist of the story who pursues a goal while the main character will be the antagonist trying to thwart the villain's plan. (For this reason, some readers may find themselves rooting for the villain, if you aren't careful to make the villain thoroughly dislikeable.)

Thriller readers like heroes to be sympathetic characters who operate in a world where genuine loyalty may be rare. "Trust no one," is the motto of the thriller genre, because most thriller heroes will suffer a betrayal at some point in the story.

For this reason, you want to write a thriller hero who is largely self-reliant with a strong independent streak, so he can cope when his allies betray him. Thriller heroes are often loners or people with only one or two extremely close allies (e.g. sidekicks) who are the only people they can truly count on.

Thriller heroes tend to have a strong moral backbone, which gives them the courage to stand up to power and corruption. They tend to have their own personal moral code rather than rely on authorities to tell them what to do. They tend to be proactive in fighting a perceived threat. And they tend to be clever -- at least, clever enough to outwit the villain.

Much of the fun of reading a thriller derives from seeing how a lone individual is able to defeat a rich and powerful villain (or perhaps an evil organization).

Start with an Idea

Before you start to write a thriller story, you need an idea, one that includes some of the basic story elements expressed as a brief summary. For instance, here's a fill-in-the-blanks approach you might use to develop an idea...

Fill in the blanks in any order, as ideas come to you, following the instructions in the brackets. By the time you're done, and your summary makes sense, you should be feeling that this is a story you can get emotionally invested in and would like to write a thriller based on it.

How to Write a Thriller Plot

Now let's review the basic formula for how to write a thriller plot.

First, if you've been following this site, you are probably familiar with the W-Plot, which applies to virtually all stories. Here's what it looks like... 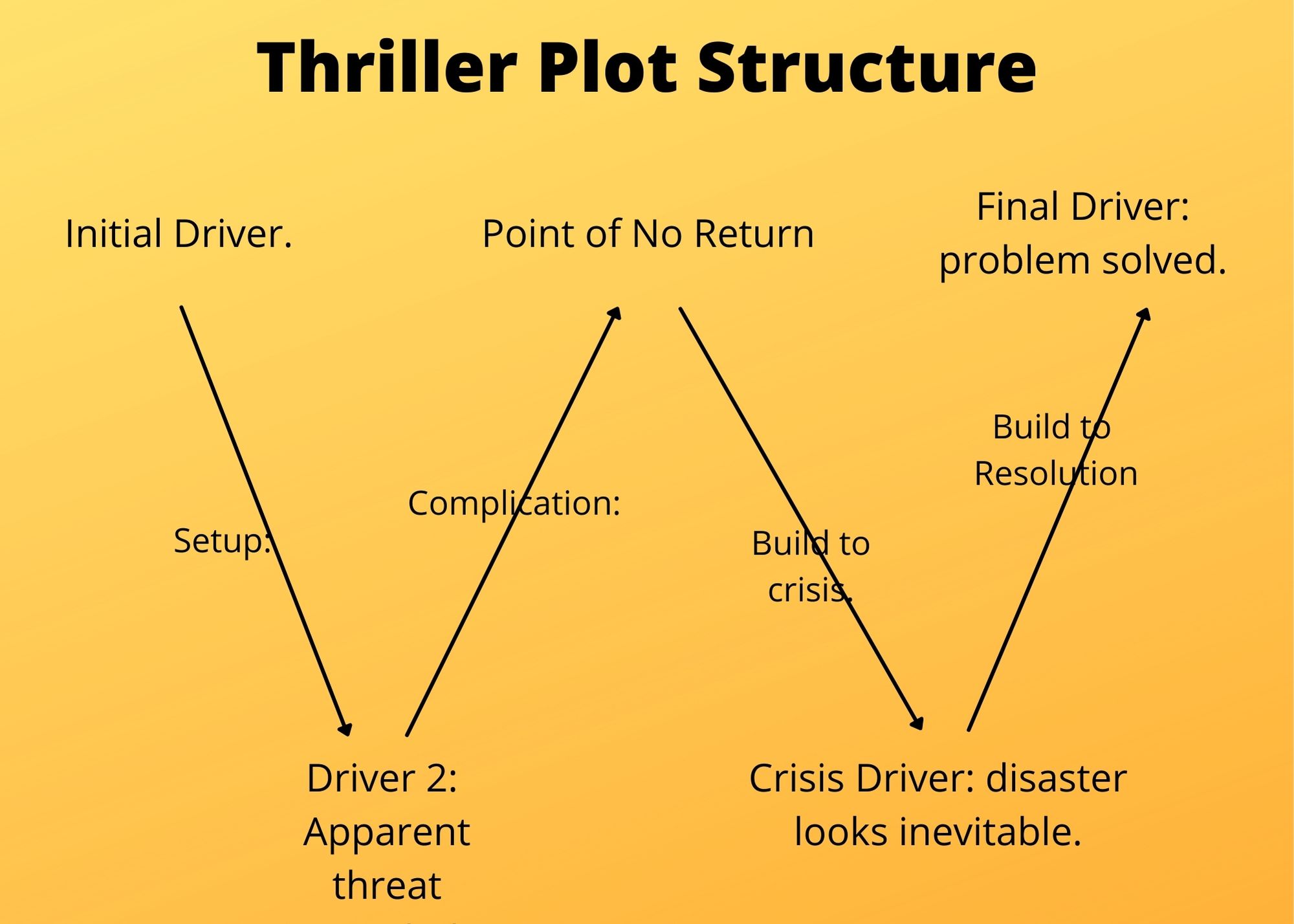 As you can see, it's a four-act model. Each of the lines represents one act, and there is a major turning point (or "driver") at the beginning and end of each act.

When you write a thriller novel or short story using the W-plot, you simply adapt each of the acts and drivers to fit the requirements of the genre. For example...

Thrillers generally begin with a shocking event, often involving violence, and usually perpetrated either by the villain or his henchmen. The event tells the readers they are in for a thrilling story. You may want to conceal the significance of the initial driver and the motivation behind it. Nonetheless, it is a taste of what might happen if the villains are allowed to continue unchecked.

In the first act,  you introduce the main character, one or more secondary characters. Show how they respond to the initial driver. At the same time, you establish the basic situation and story world.

In this event, the villains do something (possibly a second act of violence) that reveals the apparent threat, making the plot take a more serious turn. The initial driver was not an isolated event. The second driver reveals there is a bigger plan at work which the main character must discover and stop.

In the second act, the main character will try to figure out what's going on and deal with the apparent threat, while running into complications and obstacles along the way. He might worry about protecting the next victim or who can be trusted.

Third Driver: Point of No Return

In the third act, the villain takes bolder actions and makes progress. He seems increasingly likely to win. Meanwhile, the main character's team may suffer from dissent within the ranks. Pressure on main character grows, perhaps on several fronts. He may feel increasingly isolated and forced to act alone.

The crisis driver is an event that makes it seem certain the villain will achieve his goal. The crisis is important because it makes the main character realize that what he has been doing is not working. He must do something big to take control of the situation and win. He may need to completely alter his tactics, give up whatever has been holding him back, overcome his personal limitations, double his efforts, etc.

Now that the main character has realized what he must do and has committed to that choice, this act will build quickly toward his victory. He may deal with the villain's underlings, stop the apparent threat, confront the villain, etc.

This is the event that determines once and for all that the main character has won. It may be the moment that the real threat is revealed and defeated.

Some writers at this point will simply sit down and write a first draft with the above structure in mind. If you want to write a very short thriller story, you may not need to do much more planning.

On the other hand, if you want to write a thriller novel, you may need to develop your idea quite a bit more. You may want to develop the backstory, do research on your main character's area of expertise or the setting.

You may want to turn your initial idea turn into a more developed outline. You can do this by specifying what each of the drivers will be and what events will happen in each act.

For a complex story, you may want to write a summary of each event on an index card and spent some time rearranging the cards, replacing them with better ideas, etc. until you have your plot worked out. You can then edit these events together into a complete outline.

Of course, there is much more I could say about the writing process, but that's for other articles.