What is Literary Fiction?

Asking "What is Literary Fiction?" is a little bit like asking "What is art?" Most of its biggest fans can't give you a clear answer, but they know it when they see it. So even though critics can't say exactly what literary fiction is, they can easily tell you which novels do and do not make the cut. Of course, there's a big grey area between literary fiction and genre fiction, which is where lots of fun discussions take place.

Fans of genre fiction sometimes claim that Literary Fiction is pretentious, plotless, and boring. On the other side, Literary readers are likely to say that genre fiction is vulgar, predictable, plot-heavy, and (ironically) boring. We'll get to taste in a moment.

While it would be tempting to say that Literary Fiction is just another genre, that's not a claim that pleases anyone. Most readers do not see Literary Fiction as a "genre among genres" but as a something different. The fans see it as superior. And many say it is not a genre at all.

In the city where I live, for example,  there are two annual conferences for book lovers. One features Literary writers almost exclusively, with perhaps one or two token genre writers (if they can draw a crowd). The other features all the genres -- except Literary. The divide between Literary and genre fiction readers is quite marked, far greater than the divide between Literary and genre fiction itself.

So before we try to answer the question, "What is Literary Fiction?", let's consider why the divide exists...

Q. What is Literary Fiction?
A. Non-commercial. 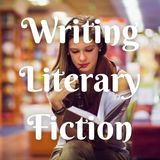 In other words, Literary writers are more likely to make the bulk of their income through teaching positions at universities, writer-in-residence gigs, grants, endowments, speaking engagements, or some other form of patronage. Getting that patronage income depends on racking up achievements such as awards, positive reviews in the right places, endorsements from other Literary writers, or earning an M.F.A. Those Literary writers who sell the most books (and get the biggest royalties) often do so because their novels become required reading in schools.

Of course, this can make Literary fans seem rather snobbish, particularly those who look down their noses at genre fiction (without actually taking the time to read it). But if we set aside the differences in how writers get rewarded, there are ways to see Literary Fiction as a "genre among genres." And like any genre, it appeals to readers looking for a distinct type of reading experience.

So let's consider what type of experience Literary fans look for...

Q. What is Literary Fiction?
A. An "intellect" genre.

Many readers will be surprised to know that Literary fiction falls into the same family of genres as Science Fiction, Psychological Suspense, and Mystery. This is because many readers of literary fiction don't dip into these other genres often, and vice versa.

However, what these four genres have in common is that they offer readers an experience that appeals to the intellect. They are genres concerned with ideas--whether those ideas are about humanity's future, abnormal psychology, the causes of premeditated murder, or some other aspect of the human condition.

Literary Fiction often is concerned with the latter. Theme matters more in literary fiction than in most other genres. The genre invites readers to not just root for the hero, but to step back and question the hero's choices and the values of the community he lives in, to ponder the bigger picture.

Q. What is Literary Fiction?
A. A Genre of Novelty.

Of course, thematic dilemmas are only one source of intellectual stimulation Literary readers seek.  Another important source of stimulation is novelty. In fact, it is the emphasis on novelty that makes it hard to answer the question, "What is Literary Fiction?" Literary fiction strives to be original, rejecting the common tropes that identify other genres. Literary novels are often more unalike each other than novels within any other genre.

This novelty can come in many forms...

How a story is told can matter more to Literary readers than whether it has a solid plot structure or narrative drive. Sophistication of style often distinguishes what is literary fiction from what is genre. That's not to say Literary Fiction lacks plots, but that plot is less important than language.

Literary readers enjoy narrators who tell their stories in a way that is both unique and authentic, whether they are first person narrators or omniscient. This quality is often referred to as the narrative "voice," and can include elements such as vocabulary, sentence structure, imagery, and the aesthetic appeal of the language.

Literary writers often experiment with different ways to tell a story. They are more likely to narrate their stories in non-chronological order, making use of flashbacks and flashforwards. They are more likely to use multiple point-of-view characters so that the reader acquires a broader perspective on the story, or to play with narrative mode. Literary novels are more likely to take the form of pseudo-diaries, letters (aka epistolary novels), or include other formats (e.g. emails, newspaper articles, poetry, billboards, etc.).

In fact, rather than writing each book in a similar style, Literary writers often strive to find a different style for each book, one uniquely suited to the particular story. Again, this quest for originality makes it hard to answer the question, "What is Literary Fiction?"

Literary readers like novels with authentic, richly drawn, and original characters. They find stock characters or archetypes dull and predictable. They want characters unlike any they have encountered before, yet at the same time recognizable from real life. And they want the experience of getting inside the main character's head and exploring its workings in depth.

Like readers of genres like Fantasy and Science Fiction, Literary readers like stories that transport them someplace they have never been, whether a location or a social milieu. They usually (though not always) prefer those places to be in the real world. However, what matters is that the setting, wherever or whenever it is should be portrayed in an authentic way that makes readers stop and consider how that environment shapes the characters and affects the thematic arguments.

As with setting and theme, Literary readers enjoy books that examine topics that are controversial or under-explored by mainstream culture. Again, it is the chance to look at something new and different that appeals.

Q. What is Literary Fiction?
A. Not as distinct as it once was.

Though Literary Fiction sometimes seems set apart from the other genres, there is actually a lot of room for cross genre novels.

For instance, you might write a novel that falls into one of the other genres, but incorporates a sophisticated style or voice, a complex thematic argument, a distinct narrative mode, or a surprising depth of characterization  that draws approval from literary readers. Or you might write a literary novel that incorporates some genre fiction tropes (which literary readers may not be familiar with).

In fact, it sometimes happens that the most critically claimed books in any genre tend to get labelled "Literary," to the annoyance of genre fans.

It's also true that publishers like novels that sit in the grey area between genre and Literary because they can garner critical acclaim as well as appeal to a large number of readers--making them easier books to promote.

One other thing I should point out about literary fiction...

Q. What is Literary Fiction?
A. Canonical Classics

As any Literature student knows, there is an established canon of stories written throughout the history of Western culture that have continued to influence later writers. These also are often included under the umbrella of Literary Fiction.

Many of these works would not be commercial or critical successes today (tastes have changed over time), but they are notable because they broke new ground. Others are still considered great today.

One must remember that before free public education became standard throughout the English speaking world, the reading population was much smaller. Books were read only by the educated elite. Those most highly regarded were reprinted and became part of the literary canon. Reading great literature was a way for an upper class person to demonstrate the superiority of their mind.

Before the 19th century, one couldn't ask the question, "What is literary fiction?" because there was no genre fiction to contrast it with. There were only good books and bad, plus a few isolated stories that would later be the forerunners of Mystery, Fantasy, etc.

Public education in the 19th century led to an explosion in the reading public and in the number of books published. Popular literature came into being which gradually evolved into what we would now call genre fiction.

Nonetheless, because much of the early popular literature was less sophisticated, educated people acquired the opinion that popular (or genre) fiction was inferior. It became a mark of status to never read fiction that was not considered Literary.

Fortunately, this bias seems to be disappearing as writers of both Literary and genre fiction learn from each other and readers expand their palettes.