Here we will review the basic types of endings, look at what makes an effective and satisfying ending, and discuss the many types of unsatisfying story endings.

Bear in mind, you can find exceptions to almost every guideline here. As with all the articles on this site, use this as a source of ideas, not limitations.

The 4 Types of Story Endings: A Quick Review 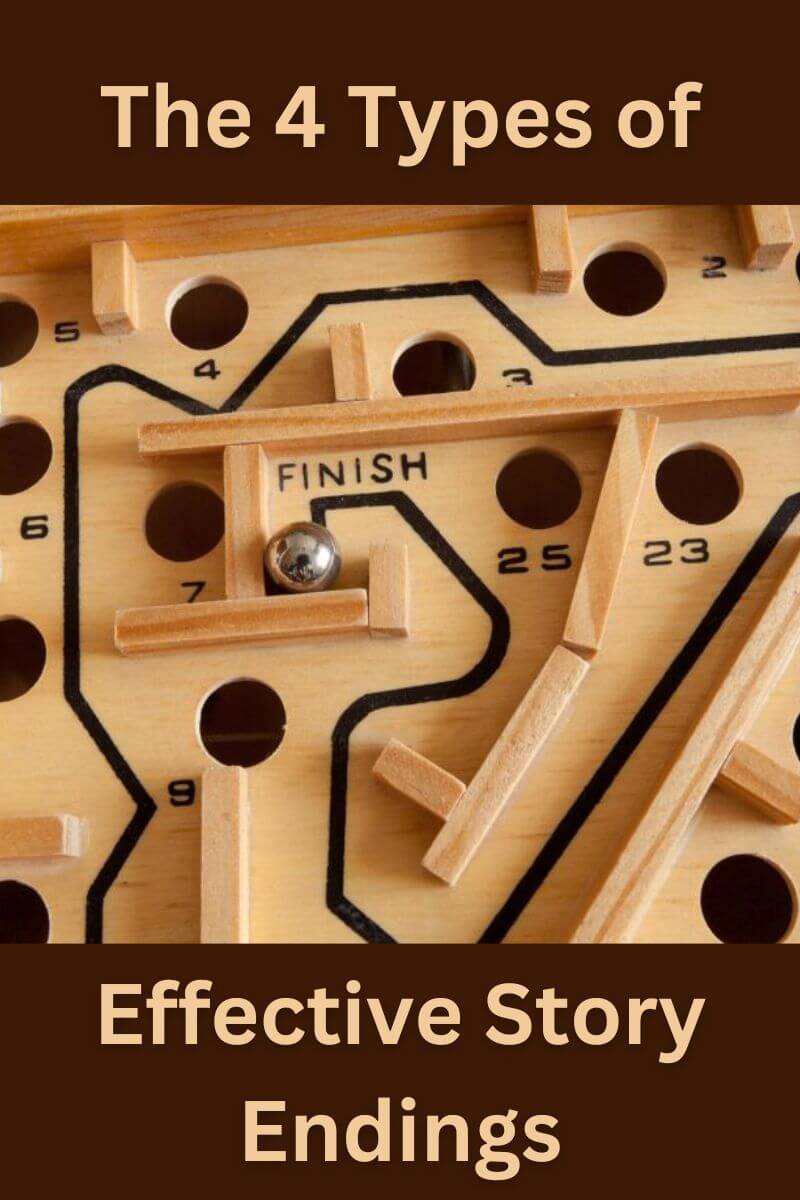 I have discussed the four types of story endings elsewhere, so I'll just give a brief recap here (you can check out the link later).

The type of ending a story has depends on two factors: whether the Story Goal is achieved (success or failure) and whether the main character ends up in a better, happier, more content state than he/she began. There are four possible combinations...

Regardless which type of ending you choose to write, there is one important criteria that determines whether the ending is satisfactory...

The Golden Rule of Story Endings

Here is the one principle regarding story endings that I think is universally true...

A good story ending must make the preceding events meaningful.

What makes a story different from a simple narrative is that a story has meaning. It conveys wisdom.

Regardless what type of story you write, a good ending must make the meaning of the story clear to the reader. If it doesn't, the reader will likely be disappointed.

Human beings like to believe they can understand life and the universe, and that by making the right choices they can exercise some control over their destiny. Stories are a vehicle for conveying our understanding of the right and wrong choices.

So story endings deliver the meaning by...

Naturally, some writers have searched for alternative types of story endings and created a few variations...

The 4 Throughlines & Reversals of Fortune

In another article I looked at how the Dramatica model, with its four separate throughlines, offers help with writing story beginnings. Let's look now at what it says about story endings... 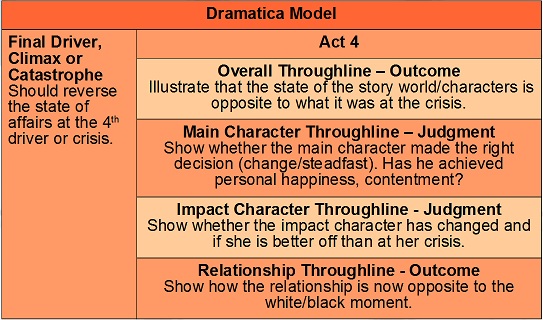 As described in the above table, much of what happens in the last act of a story is a reversal of the situation in preceding act.

For instance, at the crisis or 4th Driver (the major turning point at the end of act three), things will look their worst for the protagonist. But then the Final Driver, in act 4, will be the event that reverses this and brings about victory.

Or, if you are writing a tragic story, the crisis will be the moment when the protagonist seems on top of the world and the Final Driver will be his ultimate downfall.

After the Final Driver, you should illustrate the end of each of the four throughlines.

For the Overall throughline, show what the world is like for most of the characters as a result of the protagonist's victory or failure.

The main character will have had a personal crisis in act 3, so in act 4 you show whether he/she is happier, content, or in a better place because of how he resolved his crisis. Did she make the right choice?

And also, show whether the impact character is better or worse off in the end.

(Note: it doesn't matter what order you put these illustrations, as long as they are there.)

Show the Ending, Don't Tell It

When writing your story endings, remember that is is far better to show rather than tell. Don't just tell us the hero feels happier. Show him kissing the girl, spending the prize money, getting hugged by his loving family, or opening the bottle of champagne.

Don't just tell the reader that the war ended in victory. Show how prosperous and happy the people become afterwards.

Ask yourself what the outcome would look like if you could take a photograph of it. Or better still, if you could film an event that illustrates it. Then describe that scene in words.

Other Qualities of Good Story Endings

In keeping with a dramatic rise and fall of tension, the ending, or act 4, should respect this pattern by not introducing...

A good ending should also...

Unsatisfying story endings usually have one thing in common: they fail to deliver the meaning. However, there are lots of variations, so let's look at the different types.

Sometimes the writer leaves a particular plotline unresolved. This frustrates the reader, who cannot then derive any meaning from the story events.

One variation on this is...

(Would the writer please make up his mind so the meaning can become clear?)

Some examples would be the films Inception and Bladerunner which, at least in some cuts, introduce ambiguity into the last scene.

“Surprisingly, everything turned out fine the next day. Don't ask me how.”

This is most often found in bad children's books, where the author simply assumes the reader's aren't sophisticated enough to notice that some steps are missing. (Personally, I think kids do notice on some level that the story doesn't make sense, even if they can't put it into words.)

Sometimes the writer knows what should happen, but can't figure out why the characters would do it. So the writer just has them do it anyway. It's a bit like saying,“Who knows why anyone does anything?”

The other variation is when the writer knows what would make dramatic/emotional sense for the characters to do, but fudges the physics of how it gets done, insulting the reader's intelligence.

In these story endings, the characters' efforts and choices have no real effect on the outcome, which takes care of itself.

In this type of ending, the character's choices don't matter because a lucky coincidence brings about the ending.

“When the villain backed me into a corner, my elbow accidentally hit the right button that saved the day.”

This type of ending invalidates the main character's inner conflict.

"Coincidences to get characters into trouble are great;

coincidences to get them out of it are cheating." - Emma Coats

In this type of ending, the story problem turns out to be nonexistent or trivial, therefore not worthy of the characters' efforts. For example...

"Deus ex machina" is a term from ancient Greek theatre. It literally means "the god from the machine."

In certain Greek plays, when the plot became so twisted that it was impossible to find a satisfying ending, the playwright would use a "deus ex machina." A god would be flown onto the stage (using machinery), perhaps on a cloud, who would simply declare the ending.

Since those days, deus ex machina has come to mean the type of ending in which an outside force determines the outcome rather than the actions and decisions taken by the characters. For instance...

A twist is an event that shifts the frame of reality from one perspective to another. They can make for fun endings. But there are good twists and bad twists.

Bad twists falsify the reality established in the preceding events, so that they make less sense. As a result, the story becomes less meaningful.

Good twists, on the other hand, reveal the truth behind the preceding events in a way that resolves discrepancies and makes the story more meaningful.

In this ending, all the good guys survive, get their wish, and resolve their problems happily. No one suffers for their mistakes/flaws (except perhaps the villain).

The trouble with this is that it seems unrealistic. It makes the story goal seem too easy to obtain.

Some endings have become so over used that no writer would dare use them today, even when writing satire. (Of course, everything old can eventually seem new again, but only after it's long been forgotten by your readership.) Here are a few examples...

* Some of these were suggested by novelist William Meikle.