External conflict used to be the primary form of conflict in genre or popular fiction. Only in more literary works did heroes grow, change, or even question themselves much. Your genre fiction protagonist knew he or she was a better person than the villain and had no reason to change. So the tension in the story was all about whether the hero could outwit or outfight the villain at the climax, which made for rather shallow characterization.

Today however, even writers of children's books and cartoons put much more emotional depth in their stories by giving their main characters internal conflict as well as external conflict. Here's an easy way to distinguish between the two in terms of Dramatica theory... 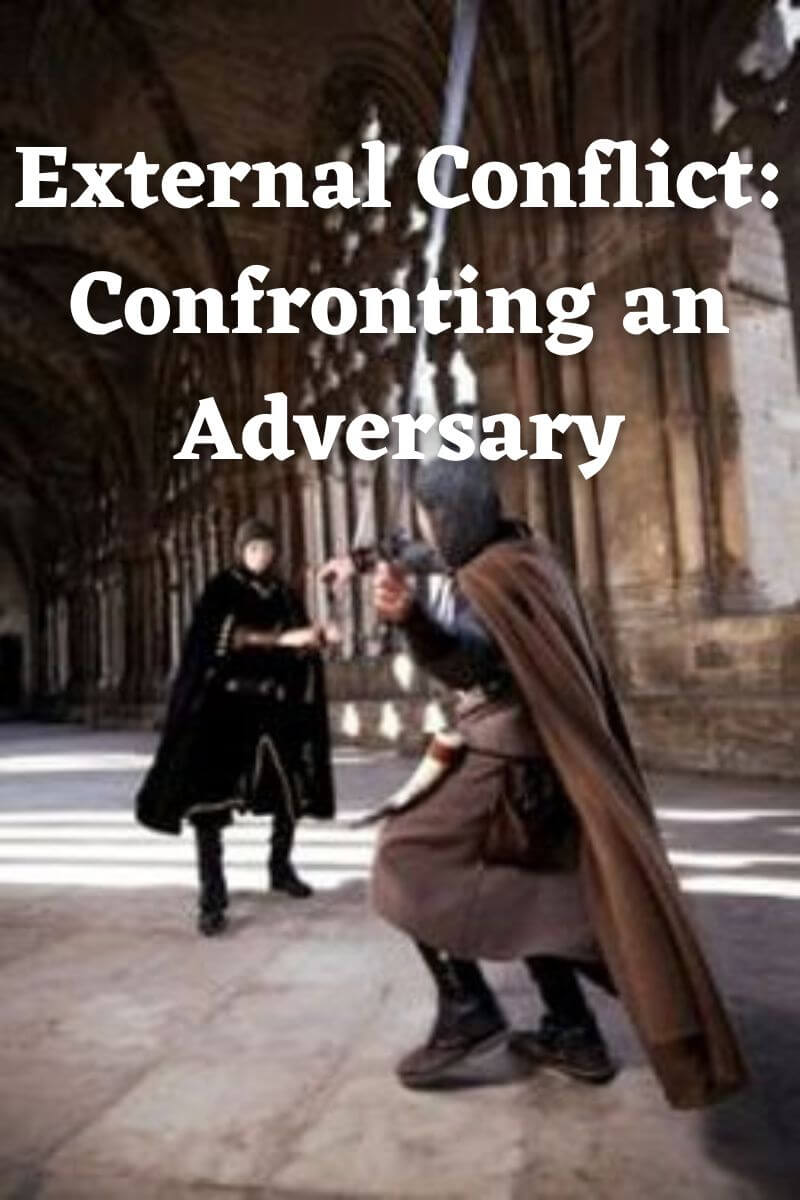 The best way to understand external conflict is that it relates to the Story Goal . Dramatica sees every story as an effort to solve or resolve a problem or achieve a goal. The Story Goal is the outcome being sought.

While most of the characters in your story will be involved in or affected by this effort in some way or other, the main external conflict will be between two characters.

In high school literature classes, we were taught that external conflict came in several varieties:

Man vs. Man (Or to be politically correct Person vs. Person)
Person vs. Nature
Person vs. Society
Person vs. Machine
Person vs. some supernatural agency such as gods, demons, fate, etc.

However, we can simplify this and say your Antagonist can be dressed up in any guise (as a person, animal, force of nature, monster, society, institution, machine, abstract idea, etc.). All that matters is that he/she/it can effectively oppose the Protagonist's effort to achieve the goal.

Most of the time, human Antagonists are the source of external conflict in stories, simply because Protagonists tend to be human and a conflict between two evenly matched opponents is more interesting. The outcome is less certain.

It wouldn't be much of a fight, after all to pit your macho hero against a lowly earthworm – unless you give that earthworm some unnatural abilities to even out the odds.

Similarly, a reader might have a hard time accepting a human who wrestles Mother Nature to the ground, unless Mother Nature had somehow been dethroned and lost all her powers. Otherwise, battling gods or Nature is a futile endeavour, the subject of tragedy. For instance, in Ernest Hemingway's novel The Old Man and the Sea, the sea is the Antagonist which thwarts the old fisherman's goal of taking home a prize fish. The Sea doesn't do this intentionally. It isn't even possessed of consciousness or intelligence (except perhaps in the man's mind). It's just a force too powerful to be beaten.

You might expect that an external conflict between a person and society would be similar. Like Nature, society is also a large entity, seemingly too big for a single person to combat. That's how it's portrayed in novels such as George Orwell's 1984. However, Western culture also has a fondness for Protagonists who stand up to society and win (for example, the hero of the TV series, The Prisoner, always manages to resist the will of the society he's trapped in).

Of course, no matter how evenly or unevenly matched your Protagonist and Antagonist are, external conflict alone is often not enough to sustain your readers' interest.

If you really want to give your story some depth, you need internal conflict. 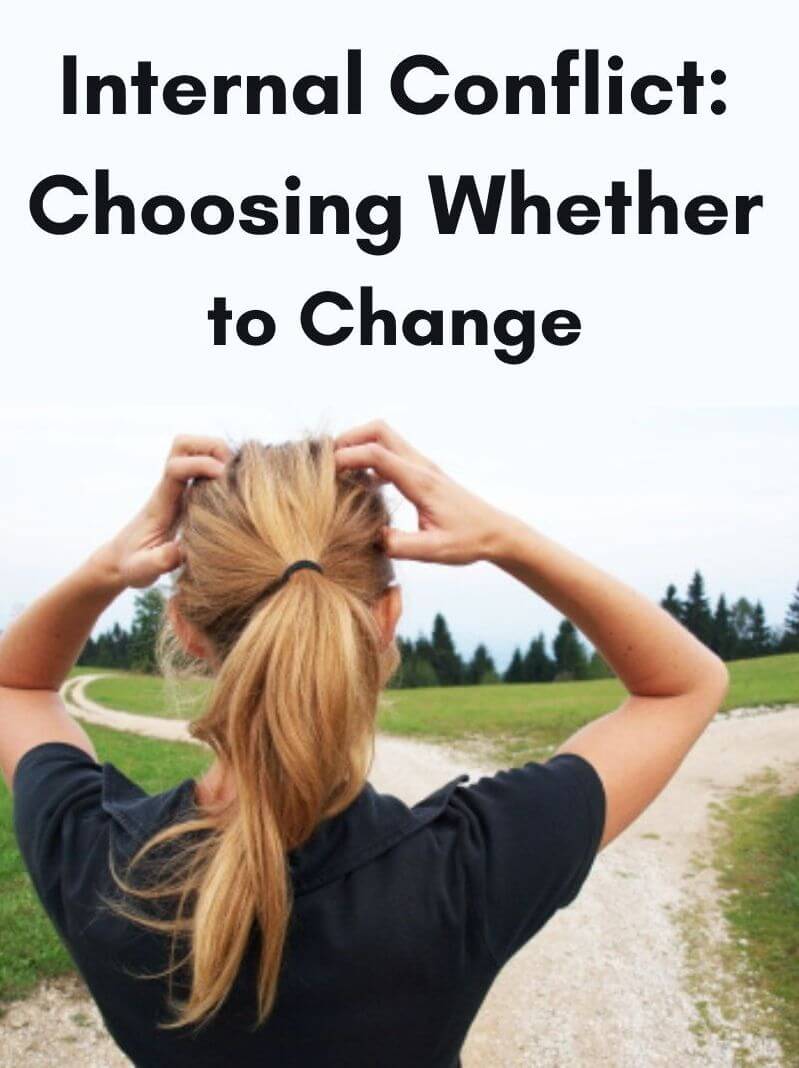 Internal conflict concerns your main character's self-doubt - his or her dilemma over the best way to achieve the Story Goal.

All of us have been in situations where we were outside our comfort zone, where we were uncertain if our usual way of being or behaving is the right way to achieve our goals.

For instance, suppose you spend several years at university being the life of the party and hanging out with very laid-back, unpretentious, Arts majors. Then one day, you have your first job interview with a really big company. This prospect leads to some internal conflict.

How should you present yourself at the interview? Should you change your appearance and personality to look like someone who would fit in with the corporate world? Should you buy a suit and some real shoes, get a haircut, etc.? Is it time to drop swear words and colloquial language from your vocabulary? Maybe you should lose your cynicism about the corporate world and start gushing optimism and enthusiasm?

On the other hand, you might decide to stick with who you are. After all, you've had success with your approach in other endeavours. You get along well with people. The interviewers might value honesty over pretension. Maybe this company has a more relaxed atmosphere that rewards individuality and creativity more than conformity? Maybe you would find more happiness working for a company that better fits your values?

Either way, no matter how well you research the company ahead of time, you still won't know for certain the right way to present yourself until you actually get a job offer.

To repeat: your main character will begin your story with a habitual way of handling problems. However, in the course of pursing the Story Goal and coping with the external conflict, the main character should start to feel internal conflict about whether his way of doing things will result in victory.

The best way to create this internal conflict is to have your main character encounter an Impact Character – a character with a very different approach to solving problems. The main character then has a reason to wonder whose approach is better – his or the impact character's.

For instance, in the above scenario, let's imagine you have a roommate who's also applying for jobs. But unlike you, he fits the corporate mold perfectly. He's the kind of guy who wore a suit and tie to his university classes. He speaks the language of the corporate world naturally and espouses corporate values. Plus, he's so optimistic and confident about his chances of landing the perfect job that you start to wonder whether you should change your style to match his.

If you were writing a novel about such a scenario, you could create more suspense by putting in events that show the advantages and disadvantages of both approaches. But the better the impact character's approach looks, the more pressure there will be for the main character to change.

Or for a better understanding of external conflict see Choosing a Story Goal.

Do you have a question about external vs. internal conflict or any other aspect of novel writing? If so, visit our Questions About Novel Writing page to get the answers you need.